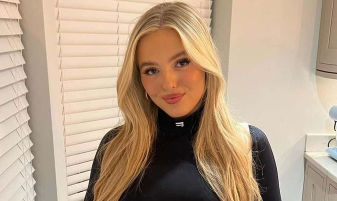 Lilly Gerrard may have been in the spotlight often for being the eldest daughter of former Liverpool soccer player Steven Gerrard, but now she’s in the news for her love life. On October 2, it was reported that Lilly, who had just turned 18, was dating Lee Byrne, who may be linked to the Irish mob.

The paparazzi saw her returning from Ibiza with her alleged boyfriend where she was on vacation with some friends as could be seen on her social networks. Lee Byrne, 23, lives in Formby and often hangs out with Lilly Gerrard in his neighborhood. The two haven’t been hiding their relationship either, as there are Instagram stories of them like the one where Lee is kissing Lilly’s head.

There were also photos of them flying back from Ibiza on their private jet. However, it is not his Instagram stories in Ibiza that have attracted attention. Lee’s father, Liam Byrne, who was seen with Steven Gerrard in Ibiza, is said to be a close acquaintance of an Irish mobster.

It has been reported that Liam Byrne is an associate of Daniel Kinahan, an Irish businessman. Kinahan has claimed to have been involved in several murders in the country. He has also been suspected of money laundering and drug smuggling worth several million pounds.

The Byrnes’ association with this particular Irish mob surfaced during a 2018 court case in Ireland. There were claims that Liam Byrne was part of the upper level of Kinahan’s group and was described as his “lieutenant to him”. With his son Lee Byrne also having an accident in January from crashing his car, trolls have started joking about him looking like his father.

Well, whether the claims are true or not, Lilly Gerrard has been happily showing off her boyfriend to her Instagram followers. She and Lee have been seen hanging out at coffee shops. She has also been sharing cute photos, like having her boyfriend’s initials on her fingernail and covering his face with a heart emoji.

The pair have also been seen taking Gerrards’ dogs for a walk. The internet was amused when one user tweeted: “Crime cartel? Make it sound like a Brazilian gang running through the streets of Rio.” Another joked: “Let’s not judge his boyfriend by the number of people he robs, kidnaps or kills, but by the content of his character.” One user asked, “I wonder how they met?”