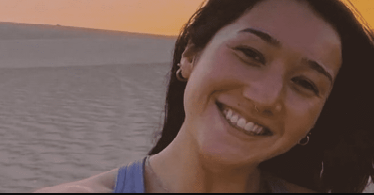 A distraught mother has shared her daughter’s first words when she called to say she had been stabbed in the skull with gardening shears by a homeless man, Kyli Watts, 24, was allegedly attacked by Jonathan Cole on October 10 in North Hollywood, California, authorities say, Cole stabbed her in the back of the head with four-inch-bladed scissors.

After the seemingly random attack, Watts ran into a neighboring restaurant with the scissors still lodged in her head as she called 911 and FaceTimed with her mother, Amy Watts. She apparently didn’t realize that the scissors were still lodged in her head. The woman’s mother told Fox LA: “Say my typical ‘Hey, what’s up, girl?’ and the first words that came out of her mouth were: “Mom, this is serious, I’ve been stabbed.”

When the shears broke Watts’s skull, medical professionals had to leave a bone fragment in place as it was in close proximity to a major blood vessel. Watts received treatment at Cedars-Sinai Medical Center. The young woman, who was just laid off from a position in tech recruiting, had surgery to treat her traumatic brain injury and is now beginning the lengthy healing process.

She doesn’t have health insurance, so a GoFundMe was created to pay for her medical costs. Amy claimed that her daughter is constantly donating money to charitable causes and that she is usually the one “crying” and “donating left and right.” “And now she’s the recipient. It’s an interesting universal change,” added the psychiatric nurse.

“If she was a person with epilepsy who hadn’t taken her medication and had a seizure while driving and hit her son crossing the street, would she really be angry or understand that this is a person with a disease? Amy explained and added that her family has had experience with the mentally ill. “That’s what we’re dealing with here. Becoming numb and callous is not the right answer. These things are happening because of a systemic failure to treat mental illness.”