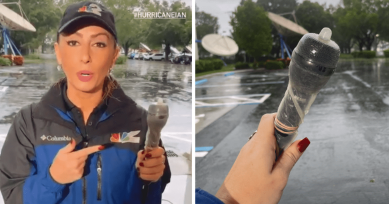 Kyla Galer, a Florida reporter for NBC 2 became an overnight sensation when she defended wearing a condom on her microphone. She was speaking from a parking lot in Fort Myers, Florida, as she reported updates on Hurricane Ian that has devastated the state.

Kyla is a three-time Emmy Award-winning journalist currently anchoring the news in Southwest Florida. She has worked extensively with KKTV 11 News and CBS Radio. However, viewers were curious to understand what she wore on top of her microphone as she reported on the hurricane.

After being bombarded with many questions on social media platforms, Kyla confirmed on her Instagram story on Wednesday, September 28, that she wore a latex condom on her microphone. Kyla also wrote on her Facebook profile, “Many of you are asking, and YES I have a condom on my mic. It’s the best way to protect it from wind and rain #themoreyouknow #HurricaneIan.”

Meanwhile, according to CNN, the situation in Florida continues to worsen as a catastrophic trifecta of high winds, heavy rain and a historic increase in storms hit the state. Jacksonville International Airport is reportedly canceling all flights beginning Thursday, September 29. The city continues to witness widespread flooding, property damage, power outages and calls for water rescue.

The internet was quick to react to this hilarious revelation. ABC 7’s Jeff Butera stated, “**WE PRACTICE SAFE HURRICANE REPORTING** Yeah, it’s a condom. Nothing better to waterproof a mic. My Waterman Broadcasting colleague @kylagaler has been answering a lot of questions haha. Moment of levity on this nasty storm… #HurricaneIan.” Another user added: “What @kylagaler did with his mic is sheer genius.”

Another user stated: “Maybe she has alternate motives, she might be a little busy logging in while she’s off the air.” However, one user criticized her saying, “So classless and disgusting.” One tweet read: “You have to respect a person who practices safe microphone use. @kylagaler.” Another tweet read: “Safety first!” One user was confused and wrote: “Nice idea, but that has to affect the sound, right?”

One tweet called it “Meme of the Year.” Another user chimed in: “Man… I think we’ve all found our Halloween costume for 2022.” “Every day it gets weirder!” another user wrote. Another tweet read: “If you’re looking to report on #HurricaneIan @kylagaler is doing a great job but don’t worry practice safe coverage.”