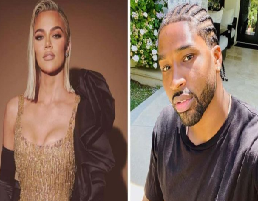 Khloe Kardashian was heard yelling “liar” in a scene with Tristan Thompson during the premiere screening of ‘The Kardashians’ on Hulu. The exes went on and off for years. They share a 3-year-old daughter, True Thompson. Khloe and the rest of the audience saw a scene of Tristan making plans for the future as viewers followed him. She yelled, “Liar!” from her seat, causing a huge reaction from everyone in the room.

Khloe addressed the outburst, saying, “When I was watching the show and Tristan was talking and saying, I don’t even know what he said because I like to turn it off, but it was like ‘Oh we’re so cool’ and whatever he said. I felt like if the whole theater was looking at me and I thought this is so awkward because it’s like shit. Like what the hell and I believed you and I was listening to you and I was getting everything you said, but you’re a fucking liar, “reports The Sun.

Khloe opened up about the anxiety she was experiencing, saying at one point, “It’s definitely a crazy experience going through the show and then watching it in real time with viewers, almost like you’re in a movie theater and you hear everyone’s responses.” in real time.” She added: “You know, when something good is happening or when it’s something nice that you love to watch, that’s really exciting and fun, and then when you have to relive something that’s maybe sad or just emotions that probably aren’t want to come back, it’s very difficult”.

During their relationship, the NBA player was involved in several cheating scandals. The latest split from him came after it was revealed that Thompson had fathered a child with trainer Maralee Nichols. At the same time, Tristan had also conceived a child with Khloe through surrogacy.

Longtime Kardashian fans have expressed their pain and exhaustion over Khloe’s rocky relationship with the father of her child. One of her most controversial moments was when she attacked Jordyn Woods, who was previously best friends with her sister Kylie Jenner after Tristan made a move on her.

Khloe still receives backlash for her misguided anger, years later. Many fans still believe that she would accept Tristan despite the most recent public humiliation. However, in an interview with GMA’s Robin Roberts, the ‘Good American’ co-founder opened up about his ex, saying, “I still think he’s a great guy and a great dad, he’s just not the guy for me. “.