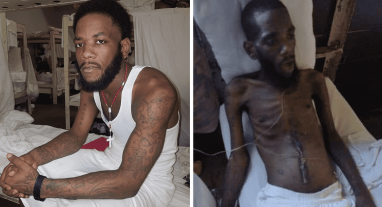 An Alabama woman has accused staff at the Elmore Correctional Center of violating the rights of her brother, who is an inmate at the prison. Kassie Vaughan shared a series of images showing her brother’s deteriorating health in prison, allegedly due to the negligence of the authorities. Kassie took to Facebook on Friday, September 23, to share disturbing images of her brother Kastellio Vaughan, who is currently serving four on a 20-year sentence for multiple counts of illegal trespassing of a vehicle and first-degree robbery. In the post, Kassie mentioned that she last saw Kastellio in July 2022 and that he was in good condition at the time.

In the images shared by Kassie, Vaughan appeared to be ill and emaciated. One image showed him unconsciously leaning against a wall, while another showed a large scar running down his abdomen. To show the considerable difference from how she looked before, Kassie also posted an older picture of her brother. According to Kassie, he has lost approximately 75 pounds.

“I am coming to you right now based on my brother’s health. My brother’s health is rapidly deteriorating. As you can see in these photos he is extremely malnourished. In these particular photos, he cannot walk or stand, he is weak and vulnerable. My last visit with my brother was on July 24, 2022, he was in good condition.” Kassie wrote in the title of the post.

Kassie also started a GoFundMe to pay for a lawyer. The page has raised nearly $7,500 of its $12,000 goal. In a follow-up post on Friday, Kassie said they hadn’t received any updates from his brother. He clarified that his family is asking for medical help, not his release.

In another follow-up Facebook post, Kassie revealed that the family has hired national civil rights attorney Lee Merritt. Merritt recently released a statement in reference to the family’s representation, saying that Kastellio underwent surgery last month in which doctors removed “a portion of his intestines as a result of the gunshot wounds” he sustained before leaving. to jail.

“Due to inadequate facilities, abuse and medical neglect, Vaughan’s medical condition rapidly deteriorated,” adds Merritt. “Vaughan is believed to have lost 75 pounds of body weight in less than a month. Vaughan’s surgical scars were exposed to unsanitary conditions and possibly became infected.”

He continued, “My office has been working to ensure that Mr. Vaughan receives the care his condition requires. We are also investigating whether or not Alabama state troopers violated their duty of care to Mr. Vaughan by allowing his medical condition to escalate.” to the limit”. point reflected in the images that now circulate on the web”.

In reaction to Kassie’s claims, the Alabama Department of Corrections released a statement saying Kastellio is receiving proper treatment at the prison. “He is assigned to the Elmore Correctional Center (CF), but is currently housed in the Staton Medical Observation Unit. ADOC’s Office of Health Services has fully investigated his situation from a clinical perspective, and he has been offered all the necessary treatment for his condition,” he said. the department said. “In addition, he has been in contact with his family to update them on his situation.”