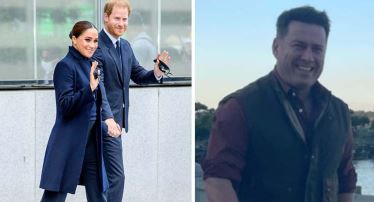 It’s no secret that Karl has been brutally outspoken with his criticism of the former actress in the past. And now, recently, during a crossover live broadcast with Nine reporter Tracy Waugh in Manchester, where Prince Harry and his wife are attending a youth summit this week, he slightly misquoted ABC’s chairman, Buttrose.

“Ita Buttrose said that they have become D-grade celebrities. That’s correct, isn’t it? she asked Tracey Waugh.
“Well, we’ve heard here too, guys, that some people say they’re not welcome here,” she replied. “There is a real divide in that support for Prince Harry and Meghan, so we’ll see how that plays out tomorrow.” Before the royal couple, Prince Harry and Meghan head to Germany to mark the one year countdown to the next Invictus Games which shortly after Meghan unleashed a media storm in an interview with The Cut magazine, the couple flew to the UK where they will attend two charity events.

Buttrose’s blunt assessment of Meghan during an appearance of hers on her old show Studio 10, where she brought up the subject of her controversial interview last week, drew criticism from Stefanovic. “Good luck to her,” Buttrose told her former co-host Sarah Harris. “I don’t want to be rude, but she’s just a celebrity. There is nothing wrong with being a celebrity, but she is one of many, while she was once a princess of the kingdom. [Now] she is carrying on her business of being a celebrity.”

Buttrose further noted that due to their declining royal status, the couple continually tried to “stand out from the crowd” of other celebrities. “They don’t have the royal family to turn to [anymore],” Buttrose said. “So they have to make every interview count. So because of the other plans, she has, you know, the books, the movies, whatever, she wants to make sure that she stands out from the crowd. So she makes provocative statements,” she added.