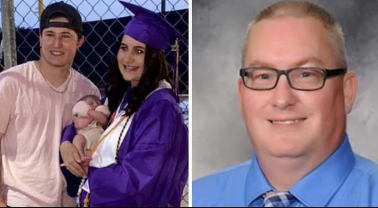 A young couple in Mississippi requested that their newborn be baptized in church, but the Rev. Dewayne Warren refused to administer the sacred rite because they were not married and “living in sin,” as stated in a letter they received from him. Kamri Mclendon, 18, and her partner, Tristan Mcphail, are the parents of a girl named Presleigh, who was born in May 2022.

Mclendon wanted her daughter to be baptized at Hickory Grove United Methodist Church in Sumrall, Mississippi, where she had been a member since she was a child. However, according to a Facebook post from the young single mother, Reverend Warren stated in a letter that he would not perform the baptism as Mclendon and “the baby’s father” lived together “in sin.”

Furthermore, he took note of the fact that the young couple did not attend church often. Given her busy schedule with a new baby, Mclendon, who posted the letter on Facebook, said they had missed some church services. In her post, she further stated that she was “embarrassed” by the church she grew up in, stating, “Instances like this are why young people are afraid to go to church.”

We are aware that we sin, but to repent because that is between us and the Lord, not being embarrassed by a church”. Mclendon added: “When people ask why there are no young people in these churches, that’s why. I will be the first to admit that I have sinned and done wrong in my life. How is it that me trying to dedicate my daughter to Jesus turned into shame for us being young single parents?

According to the letter, dated September 15, if Warren were to administer baptism to the newborn, it would set a negative example for the youth and young members of the church. “I am informed that you and the baby’s father are living together in sin; the baby was conceived before the parents were married,” the letter began.

“It would be telling them that the lifestyle you are living is fine for a Christian. That is not like that. Mclendon and her boyfriend told WLBT they were caught off guard by the letter after they were first told Warren would officiate at his daughter’s baptism. “He knew all the information that we weren’t married, all of that,” Mclendon said. “And he agreed.

He said, ‘Yeah, that works.’ His wife sent us the material of what should be said in the service. She even announced it to the congregation. My grandmother and my aunt and uncle were all there. And then she sent us that letter.”
Mclendon said in a post that they had requested a “baby dedication” for her daughter and it was granted. Even the church gave notice of the ceremony.

“We know what the Bible says,” she said. “In fact, we sin. But he knew all that and still he agreed. If he had been direct from the start, this wouldn’t have been a problem for any of us.” Mclendon said the comments in the letter continued to have an impact on her saying, “My heart is breaking.”