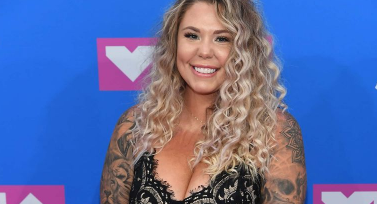 A cryptic tweet from ‘Teen Mom’ star Kailyn Lowry left her fans scratching their heads and worried for her. The 30-year-old television personality took to Twitter recently and posted: “Sorry,” without elaborating on the tweet. She did not explain who she was apologizing to. While some people send their love to the TV star, others criticized her for seeking attention.

Her fans couldn’t keep their cool when one of them shared on Twitter, “From one mom to another. You are a strong person and you have this ?? no matter what happens, she is still the beautiful queen that you are. Sending you lots and lots of love ??.” The second fan wrote, “Whatever it is, keep your head up and don’t apologize anymore. U run your own business as you see fit.”

However, not everyone was nice to her for her strange tweet. One reviewer shared, “Stop worrying your fanbase. It’s not a good look. Another critic tweeted: “She must need attention today.” But one user claimed: “The whole ‘be nice’ movement is just a farce to most people. They soon forget and go back to being the mean, bullying high school kids they’ve always been.” A user named @turtlemenow speculated: “I feel like he’s referring to watching the Dalhmer series. Her tweets before and after her are about that. She’s probably just expressing sympathy for the victims. That would be my guess.

It looks like @turtlemenow’s guesses were correct, as Lowry’s next tweet read, “Finally finished Netflix’s dahmer series.” Her second tweet also garnered a lot of attention when one Twitter user wrote, “I just started watching it. Evan Peters plays Dahmer so well it’s hard to watch. In the opening scene I saw a $2.29 bottle of washing up liquid, though I’m not too sure the price reflects things in 1991. ?”

The second user tweeted: “I’ve heard the Dahmer story so many times from true crime bloggers, I’m not sure I can get into it.” “How are people getting through this? I had to turn it off in the middle of episode 1 ? Kudos to you girl!” one person stated.

Another person’s tweet was: “It’s such a great series but it’s horrible to think that anyone would even think of doing something like this. Correct.” “I only got to watch the first 2 episodes and I needed a break…” he pointed out the third and the fourth added, “All I can say is it was wrong. Illuminating? But in poor condition. “I couldn’t even finish watching the trailer,” read one tweet.