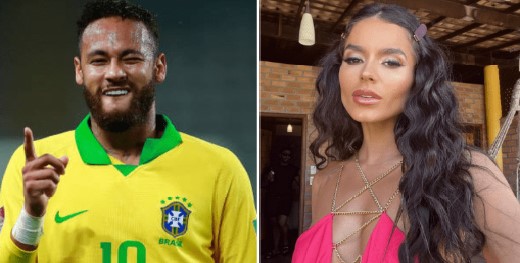 Brazilian soccer star Neymar Jr may have fallen in love again, this time with a Miss Espírito Santo contestant who is a popular model and social media influencer. The sensational winger, 30, is being linked to model Jessica Turini, who is also 30. Turini, who represented the city of Vitória, the state capital, when she competed for Miss Espírito Santo 2014, already drew attention by sharing her reaction to Neymar’s. goal on social media.

She reportedly filmed the penalty kick at Qatar’s 974 Stadium and filmed herself kissing the star’s autographed team jersey emblem. A large number of celebrities came to Paris to celebrate New Year’s Eve. It is said that Neymar, who plays for Paris-Saint Germain in Ligue 1, invited Turini among his guests. The model reportedly arrived in the French capital on Wednesday, December 27, and posted on social media about herself from there.

Earlier, the brunette beauty was also reportedly in Qatar to watch the matches of the Brazilian national team, according to Marca. Turini reportedly lives in São Paulo and likes to race go-karts and is a big fan of surfing. In addition to modeling, her LinkedIn profile suggests that she also works as a contact manager at an automation company run by her family.

According to GShow.Globo, she is very religious and describes herself as “a servant of Jesus Christ and in love with him.” She also has an Instagram highlight titled ‘Jesus’ in which she shares photos of her visiting church and praying, among other things.

According to GShow.Globo, she has two brothers, Caio and Antônio. The model shared some snapshots on Wednesday, December 28, while in Paris, France, where Neymar also celebrated New Year’s Eve with his PSG teammates, fueling speculation that he may have been the main reason for her trip to the city. of love. “Parisian night the way we like it,” he captioned one post.

Neymar was recently dating Bruna Biancardi, an influencer who competed on an MTV show ‘De Ferias com o Ex’ (Holidays with Exes). The former couple announced they were dating in January 2022, but the relationship apparently fizzled out in August 2022.

Before Biancardi, the UEFA Champions League winner was in a long-term relationship wit Bruna Marquezine. They reportedly met at the Rio carnival in 2012 and were in an on-and-off relationship for six years before finally breaking up due to their careers. However, the exes remain on good terms with each other.