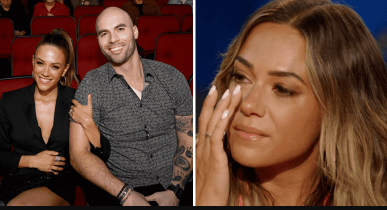 Jana Kramer revealed how her ex-husband’s infidelity affected her life and ruined her dreams of an ideal family during an episode of ‘Red Table Talk’. The former ‘One Tree Hill’ star broke down in tears when asked by host Jada Pinkett Smith about the number of women Mike Caussin cheated on her with. Kramer revealed that her ex was involved with more than 13 women during their six years of marriage.

In a preview clip from the episode, which deals with “toxic forgivers,” Jada invited three women to talk about the complexities of their past relationships. The episode will air on Wednesday, October 19, and the snippet has livened things up for fans of the show. A devastated Kramer opened up about her children not being able to celebrate Christmas at her family’s home since she and Caussin split up. She also mentioned that her ex-husband destroyed her dreams.

While discussing her time with Caussin, Jada admitted that the things Kramer went through were really painful. “I know we’re both in better situations, but I think my kids won’t be waking up at my house on Christmas day this year. That’s going to hurt,” Kramer said, wiping away tears.

“That’s hard when your family dreams coincide with childhood trauma,” Jada said, endorsing the actor’s struggles. Kramer reportedly pardoned Caussin several times before. She always decided to make up with her ex, which fans can get a hint from her book, ‘The Good Fight: Wanting to Leave, Choosing to Stay, and the Powerful Practice to Love Faithfully’.

However, Kramer was finally able to end Caussin just a few months after the book’s release, in September 2020. She expressed her resentment towards her ex on the talk show. “That’s when I think, ‘That’s not fair. You took away my dream too, what I wanted for my family. That’s not fair.'”  In another clip, the actor talks about how Caussin would feed on his empty promises by assuring him that he would get baptized or seek therapy to create a better version of himself. Caussin and Kramer announced their divorce in April 2021.

“Finally, the last time, last April, when I caught him again, he said, ‘Now I know I’ll never do it again.'” And I was like, ‘For that person, she’s going to be very lucky that you don’t,’ and that’s when I left,” he continued. Kramer filed for divorce after her ex-husband’s infidelity scandals and when he was diagnosed with a sex addiction. They share two children, her daughter Jolie, 6, and son Jace, 3.