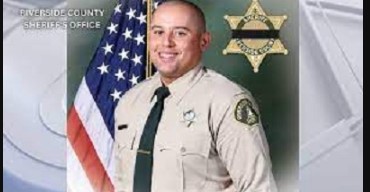 A Riverside County Sheriff’s Department deputy was shot and killed in Jurupa Valley Thursday afternoon. “Our community is devastated by the loss of one of our Sheriff’s Deputies,” said Jurupa Valley Mayor Chris Barajas. “Our thoughts are with the officer’s family and all the law enforcement community.”

The department identified the deputy as Isaiah Cordero, 32. He was hired by the department in May 2014, working as a correctional deputy at Robert Presley Detention Center, Larry Smith Correctional Center and Indio Jail before becoming a sworn deputy sheriff in 2018. He transferred to Jurupa Station in 2020.

Isaiah Cordero  Cause of Death

Authorities arrived shortly after and rushed Cordero to the hospital where he ultimately died. The community was in mourning Friday night, shocked that a tragedy like this could occur. “My husband and I instill that good behavior is going to have a good consequence and law enforcement is out there to protect, to serve, and to be respected,” said Carmen Rodriguez, a mother of three.

Amid the chaos at the crime scene, California Highway Patrol and other law enforcement agencies tracked down the suspected gunman, eventually engaging in a pursuit on the I-210 Freeway near Claremont. Anywhere between 30 and 40 vehicles could be seen chasing the suspect as they drove down I-210, SR-60 and I-15.

Deputies laid a successful spike strip at the intersection of Valley Way and the 60 Freeway, causing one of the vehicle’s tires to shear off. The pursuit continued, however. The chase continued back onto the I-15 before ending in the middle of the highway near the City of Norco. The suspect was fatally shot by deputies after allegedly opening fire upon them once the vehicle finally came to a stop.

Authorities closed parts of the I-15 Freeway near Norco to investigate the scene.The suspect was identified as San Bernardino County resident William Shae McKay, 44. Officials indicated that McKay had an extensive criminal history dating back to before 2000, with charges that included: kidnapping, robbery and multiple assaults with deadly weapons. He was also allegedly involved in the stabbing of a California Highway Patrol K-9, according to Bianco.

“This terrible tragedy should’ve been prevented by the legal system,” Bianco said. “McKay has an extensive violent past and was convicted of his third strike in November of 2021. … Instead of sentencing him to 25-years-to-life, which should have happened, the judge lowered his bail allowing him to be released.”

“We would not be here today if the judge had done her job,” Bianco said. The San Bernardino District Attorney’s Office said in a statement that McKay was convicted of a third strike in Nov. 2021. “Despite our requests at that time to set bail at No Bail, his bail was reduced by the judge to $500,00.00, and his sentencing was continued,” the District Attorney’s office said in a statement.

“McKay posted bail in March of 2022, and unfortunately in July was granted another continuance for sentencing, which our Office also objected.” McKay failed to show up to his sentencing hearing in Oct. 2022, prompting officials to issue a bench warrant.

“Our Office is saddened to learn of the death of Riverside County Sheriff’s Deputy Isaiah Cordero,” said District Attorney Jason Anderson. “Our Office upheld our oath of pursuing justice by prosecuting convicted felon McKay in November of 2021, however a failure in the process to separate McKay from society and hold him accountable for his crimes has resulted in the tragic loss of a law enforcement deputy.”

Hundreds of Riverside County Sheriff’s Department deputies, as well as officers from several other Southern California agencies, participated in a lengthy procession for the fallen deputy as their body was transported to the coroner’s office in Perris.

A statement from the Riverside Sheriff’s Association read: We are devastated by the grief of losing Deputy Isaiah Cordero, a deputy who was a ray of sunshine in the Riverside Sheriff’s Department, a person who was dedicated to protecting others. Once again, we face a tragic reminder of the selflessness and unwavering courage required of peace officers and their families.

“Deputy Cordero put on his uniform daily to make a difference in his community and keep families safe. Deputy Cordero’s death leaves a tremendous hole in the hearts of so many people who had the chance to know him personally. Today, Deputy Cordero made the ultimate sacrifice in the line of duty — a debt that can never be repaid.

We must honor his memory and life of public service through our words and actions. Our heart goes out to his family, friends, and fellow deputies through this difficult time.”A number of local law enforcement departments took to social media to offer their condolences following the news of Cordero’s death. The tragic shooting also caught the eye of Governor Gavin Newsom.