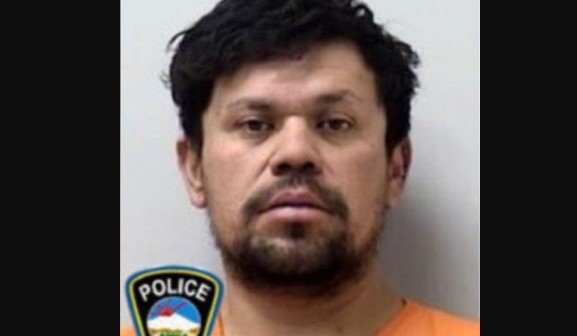 A 36-year-old Colorado Springs man was last arrested for allegedly shooting and killing his roommate with a compound bow and arrow, then breaking into the local police station in an attempt to turn himself in. Carlos Alberto Trejo was arrested and charged with one count of second-degree murder in the death of 37-year-old Martín Rodarte, court records reviewed by Law&Crime show.

According to a probable cause affidavit obtained by Law&Crime, a Colorado Springs Police Department corporal at approximately 1:23 a.m. window. Trejo allegedly scaled the back door, which was marked “Authorized Personnel Only,” and then tried to enter through the substation’s locked back door. When he couldn’t get in, Trejo allegedly pulled the fire alarm before using an ice scraper to break the window near the back door of the station.

When the corporal confronted Trejo on the spot and asked what he was doing, Trejo allegedly confessed to killing Rodarte and said he was “trying to turn himself in.” “I woke up and I shot my friend in the chest,” he allegedly said, providing an address in the 1300 block of Kelly Johnson Boulevard. “I shot him with an arrow,” he allegedly added, identifying the victim as “Martin.”

However, the officer, Corporal A. Grimes, did not initially believe that Trejo had shot anyone due to an encounter he had with Trejo less than two days earlier. “Corporal Grimes told Your Affiant that he had dealt with Mr. Trejo on 12/16/2022, and Mr. Trejo admitted to using acid and cocaine at that time, and Corporal Grimes believed Mir. Trejo was hallucinating and emotionally distraught during his contact with Mr. Trejo on 12/16/2022,” the affidavit states.

“Corporal Grimes told his witness that he did not believe that Mr. Trejo had shot anyone with an arrow this morning, and he believed that Mr. Trejo was still hallucinating and/or under the influence of narcotics. ”. According to the affidavit, Trejo called CSPD on December 16 at approximately 7 p.m. and said that “there was a situation in the apartment that he had to escape from,” but he refused to provide the operator with any additional information.

When officers tried to call him back, they said he was “very uncooperative.” Several hours later, at approximately 11 p.m. him on acid, hallucinating and making other patrons uncomfortable.” Upon arrival, Trejo allegedly told police that he was taking acid and was transported to the hospital for medical evaluation “for a possible acid overdose.”

After Trejo was caught allegedly breaking into the police station, officers responded to the Kelly Johnson Boulevard address where they found the front door unlocked. When they entered, they located the body of an adult male on the apartment’s bedroom floor with “a compound archery bow” located next to the body.

Investigators spoke with Trejo’s girlfriend, who allegedly told them that she had moved out of the Kelly Johnson Boulevard home a few weeks ago after “a disturbance” between her and Trejo. Rodarte, whom he identified as Trejo’s cousin, moved in around the same time, she reportedly said. Trejo is currently being held at the El Paso County Jail on $500,000 bond, jail records show. He is currently scheduled to appear in court for his preliminary hearing on January 25.