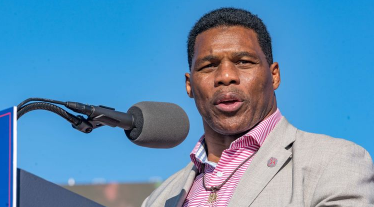 Herschel Walker, a Republican candidate for the Georgia Senate, is once again embroiled in controversy after a second woman accused him of coercing her and paying her to have an abortion. The woman addressed the media directly at the Los Angeles office of attorney Gloria Allred on Wednesday afternoon via conference call while using the alias Jane Doe, the Daily Mail reported.

After having a long-term relationship with Walker, Doe said that in April 1993, he forced her to have an abortion, paid for it and took her to a clinic in Dallas, Texas, where she had the procedure while he waited in the car. According to the Daily Mail, the woman said: “I was confused, insecure and scared. After discussing the pregnancy with Herschel several times, he encouraged me to have an abortion and gave me money to do so.

Herschel says he is against women having abortions.” , but he pressured me to have one.” In support of Doe’s statement that she had a six-year affair with Walker while he was a married NFL player, attorney Allred showed reporters a variety of “evidence,” including a hotel room receipt, cards with sweet notes written by “H”, and an alleged image of Walker with the woman in a hotel room.

Although the woman claimed that she had an abortion at Walker’s request, Allred did not provide any tangible evidence to support that claim, such as a receipt from the clinic or any medical documents. Walker, a vehement opponent of legal abortion, dismissed the claims as baseless and politically motivated as he spoke at a campaign event in Georgia while Allred’s news conference was taking place.

Recent reports prompted Walker to declare, “I’m done with this nonsense. I already told people this is a lie and I’m not going to entertain.”In 2009, Walker allegedly urged and compensated another girlfriend to terminate her pregnancy, according to initial reports in the Daily Beast. As MEAWW previously reported, a woman who wishes to remain anonymous told The Daily Beast that she and Walker conceived a child while dating in 2009 and that he pressured her to have an abortion at the time.

She claimed that the former NFL star even reimbursed her for the procedure. The woman presented a $575 receipt from the abortion clinic and a recovery card from Walker to support her claims. The woman said that Walker, who was not married at the time, urged her to terminate the pregnancy because “it was not the right time” for him to have a child. Walker also allegedly fathered a child out of wedlock with another woman that same year.

The woman claimed that Walker never expressed any regrets about the decision. “I just can’t handle the hypocrisy anymore,” she said of Walker’s anti-abortion position. “We all deserve better. The new Doe woman stated during the press conference that she was hiding her identity for fear of retaliation, adding, “I choose to protect my identity to protect those I love.”

She claimed that she is a registered independent who voted for Donald Trump in the last two presidential elections and refuted claims that her accusations against Walker were politically motivated. She claimed that she found out that she was pregnant in April 1993 and that the news “shocked” her because she had been using contraception for several years. She said that during that time she only had an intimate relationship with Walker and was aware that the child was hers.

She alleged that when she informed Walker of her pregnancy, he gave her cash for an abortion and urged her to have one. However, she claimed that when she arrived at the clinic for the abortion, she was filled with emotion and had doubts about whether she really wanted the procedure, so she left without having an abortion. When Doe told Walker what had happened, he insisted on taking her to the Dallas abortion clinic himself and waiting there for hours until she had the surgery.

She claimed the incident “traumatized” her and a few days later she left Dallas, not to return for another 14 years. She claimed that it effectively spelled the end of her alleged relationship with Walker. According to the Guardian, Doe said she felt “naive” and that Walker “took advantage of me,” saying, “I was devastated that I felt pressured to have an abortion.” Doe later said, “The reason I’m here today is that you have publicly taken the position that you are ‘above life’ and against abortion under any circumstances, when, in fact, you pressured me to have an abortion and personally made sure it happened by taking me to the clinic and I paid for it.”