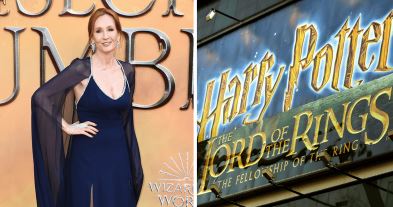 It looks like the world of Harry Potter will soon be seen on television screens, as rumors circulate that Warner Bros., which recently merged with Discovery, is signing JK Rowling to a contract. Writing for the Daily Mail, columnist Alison Boshoff quoted her sources as saying that a deal had actually been struck no less than six months ago and that work had begun on a Potter spin-off.

The Showbusiness chief writer noted that insiders told her, “People who work for HBO talk about the Potter spin-off as fact.” Not just the TV series though, Rowling is also planning to start work on another Potter movie franchise. But Warner Bros. representatives have refuted both speculations and have not even confirmed that Warner Bros. Discovery CEO David Zaslav has met with the 57-year-old writer.

Boshof in his report noted that “most peculiarly, given that the ‘meeting’ would refer to the largest asset Warner has, the intellectual property (IP) that covers all things wizard boy, and thus would not be personal in absolute. Rowling controls Potter’s ‘IP’, and every decision has to go through her, whether it’s about merchandising, theme parks, video games or anything else.”

He continued: “Warner Bros would have to be blind not to want to follow the example of Disney, which has launched successful television series spin-offs from its Star Wars and Marvel film franchises, including Loki, Obi-Wan Kenobi, WandaVision, The Mandalorian, Ms. Marvel and Moon Knight,” before adding, “It is a matter of record that Zas, a lawyer, went on a listening tour after joining the company in April. In May, the Wall Street Journal profiled him and said that he planned to meet J.K. Rowling imminently. They told me they met and everything went well.”

Boshof also pointed out that when Rowling faced heavy criticism for her comments about transgender people, Warner Bros. did not openly comment on it, while Harry Potter’s lead actors, Emma Watson and Daniel Radcliffe, attacked her directly with her words. . Radcliffe responded by saying, “I feel compelled to say something at this point. Transgender women are women. Any statement to the contrary erases the identity and dignity of transgender people and goes against all advice from professional healthcare associations.” who have much more experience in this matter than Jo or I”. However, when the philanthropist tweeted: “Horrible news. I feel very sick right now. Be well”, after the novelist Salman Rushdie was violently attacked in New York and, in return, received a death threat, the film producer supported her.

In a statement, Warner Bros. Discovery said: “Warner Bros. Discovery strongly condemns the threats against J.K. Rowling. We stand with her and all the authors, storytellers, and creators who bravely express her creativity and her opinions.” He added: “WBD believes in freedom of expression, peaceful speech, and supporting those who offer their views in the public arena. Our thoughts are with Sir Salman Rushdie and his family following the senseless act of violence in New York. The company strongly condemns any form of threat, violence or intimidation when opinions, beliefs and thoughts may differ.”