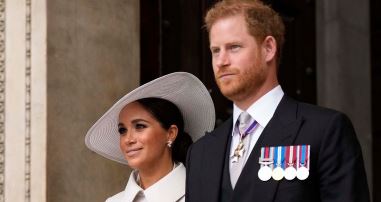 Prince Harry and Meghan Markle will reportedly visit the UK in September to attend two charity events despite their ongoing dispute with the government over police protection.

The Duke and Duchess of Sussex will travel to Manchester for the first time since the Queen’s Platinum Jubilee celebrations for the One Young Global Summit, an event that brings together young leaders from over 190 countries, on September 5. The couple will then head to Germany. for the Invictus Games Dusseldorf 2023 One Year to Go event, before traveling back to the UK for the WellChild Awards on September 8. It’s worth noting that Meghan is a councilor for the One Young World Summit, along with Justin Trudeau, Sir Richard Branson and Jamie Oliver among other famous figures.

Harry and Meghan’s age is unkown.

Harry and Meghan last visited the country in early June for the Platinum Jubilee celebrations. However, it is unknown if their children Archie or Lillibet will join them on the journey. This comes after reports in July that Queen Elizabeth II has invited the family to spend time with them at Balmoral this summer. However, it is unclear if the Sussexes will visit the 96-year-old monarch during her next trip. “Prince Harry and Meghan, the Duke and Duchess of Sussex are delighted to visit a number of charities close to their hearts in early September,” a spokesperson for the couple said.

The announcement came just weeks after it emerged that the Duke of Sussex had filed a second lawsuit against the UK government and Scotland Yard over his decision not to allow him to pay for police protection every time he visits the country. Harry is already suing the Home Office over its 2020 decision to remove taxpayer-funded protection for him, which he says has made it unsafe for him to visit Britain with his wife and his two children. .

That said, the couple may not be able to meet the Queen in London or Windsor if there are conflicts with their schedule next month. Meanwhile, an explosive memoir to be published later this year also threatens to overshadow the one-on-one meetings between the Sussexes and royals. Harry and Meghan’s scheduled visit to Manchester on September 5 is the same day the Conservative Party is scheduled to announce the next Prime Minister. According to tradition, the Queen meets the newly elected leader soon after.

It is understood that Harry’s latest lawsuit against the Home Office is still at an early stage, considering no hearings have yet been scheduled. The case will center on a January decision by the Royalty and VIP Executive Committee (RAVEC) that private individuals should not be allowed to pay for police protection. However, a second court case is sure to heighten tensions between the Sussexes and the royal family amid claims that the queen’s private secretary, Sir Edward Young, was involved in the decision to deny them protection.

According to the prince’s legal team, there have been “significant tensions” between the Duke of Sussex and Sir Edward. Harry took legal action against the department after being told he would no longer enjoy the “same degree” of personal protection security while visiting the US His representatives had previously expressed a desire to bring his family to visit the UK. Kingdom, but that they “could not return home” because it was too dangerous, the Daily Mail reported.