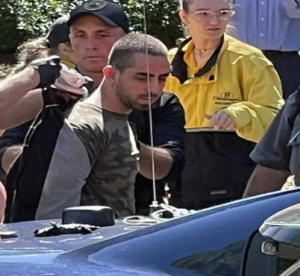 Hadi Matar: Who is he? Americans and Lebanese did it, 1.8 billion Muslims had not been able to do it in the last 30 years At the time Salman Rushdie was introduced at a summer literature festival held at the Chautauqua Institution Amphitheater in western New York, Hadi Matar is alleged to have attacked Rushdie.

On Friday, novelist Salman Rushdie receives medical attention after an assault that occurred during a speech.

At the time of the alleged assault, Rushdie was being featured at a summer literary event at the Chautauqua Institution Amphitheater in western New York. Hadi Matar, 24 at the time, was the suspect. According to a statement made by his agent Andrew Wylie to the New York Times, Salman Rushdie is currently unable to speak and is being kept alive by a ventilator after the incident. In an email, Wylie stated: “Unfortunately, the news is not good.” Salman had nerves severed in his arm, his liver punctured and he will likely be blind in one eye.

Police have detained Matar, a New Jersey citizen who had a pass that allowed him to enter the event. According to state police, a backpack was discovered at the scene along with various other electronic equipment. The young man, who was only 24 at the time, allegedly climbed onto the podium and began punching Salman Rushdie, who was scheduled to appear there alongside novelist Henry Reese.

Author Salman Rushdie, 75, is said to have fallen through a wall and bloodied his hands, according to witnesses who spoke to AP News. “Blood was dripping onto the floor from him, and he was completely covered in it. According to a statement made to the New York Times by a witness, “I just saw blood all over his face, running down his cheek.” Photos taken at the event showed a large crowd gathered around the author as he spoke. The crowd was also reportedly responsible for stopping the attacker.

Eyewitness John Mulherin, an 80-year-old retired attorney from Glen Ellyn, Illinois, who was present at the event, testified that the audience fell silent after the attack. Mulherin was there at the event. When Salman Rushdie entered the room, there was a thunderous round of applause that lasted for several minutes. As he was preparing to make his presentation, he had just sat down to participate in a question and answer session. Mulherin went on to say: “Right after they sat down, another man ran out from the left side of the platform and stabbed him.”

The New York State Police have stated that Salman Rushdie was stabbed at least twice, once in the neck and once in the stomach. Reese just suffered a minor concussion. An Associated Press reporter claimed that the man attacked the author “between ten and fifteen times”, either punched or stabbed. Mulherin stated this while he was talking to a woman who was close to her and said, “I couldn’t see from where I was sitting, but she talked to me and saw blood on the floor.” [Case in point:]

Piercing Salman Rushdie’s neck with a knife was a tremendously risky undertaking. After the quip, there was a perceptible pause on the part of the audience.

As you know, he was stabbed in the neck, which is a very dangerous injury. After the event, there was a perceptible and audible silence among the audience. Only genuine concern In a series of photographs that were sent to Twitter by an eyewitness, the well-known British author could be seen being carried away on a stretcher. According to Mulherin, Rushdie was taken to the hospital after being rushed to the tennis court where the emergency helicopter had landed. Mulherin said the medical helicopter landed there. Matar could be seen wearing a camouflage print t-shirt, dark jeans and black sneakers in a second image that was released. He was also chained behind his back in this image.

According to a witness who confided his knowledge to The Daily Beast, after the ambush, Rushdie “was able to walk with support.” After gasping for breath from the atrocity, hundreds of fans had to be escorted out of the arena. Pautler described the assailant as “squat and wearing a black headdress.” According to a second witness who spoke to The Beast, Rushdie had “just come out and sat down” on stage when he was attacked. Pautler characterized the assailant as having a “heavy” physique.

The witness stated that he initially believed that Rushdie was being “punched” by his assailant, but later admitted that he was “stabbing” him. I quickly came to the conclusion that he wasn’t hitting Rushdie due to the fact that he doesn’t hit with the side of the hand. It’s quite strange to think about that.

The more you think about it, the more sinister it seems, as the witness noted. A police officer who responded to the scene immediately took the suspect into custody after discovering him there. There has been no investigation into what led up to the attack. The police have not yet filed charges against Matar because they are waiting for a decision based on Salman’s condition before making a decision.

The NYSP is currently conducting a search of the suspect’s residences and vehicles. The White House issued the following statement in response to the incident: “Today, the nation and the world witnessed a terrible crime against writer Salman Rushdie.” This act of violence is repulsive to me. The entire Biden-Harris Administration crosses its fingers for a speedy recovery.

The Chautauqua Institution hosted a discussion that focused on discussing “The United States as a haven for authors and other artists in exile and as a place for freedom of creative expression.” This was the main focus of the discussion. The venue is so prestigious that it has attracted some of the world’s most famous authors, politicians and scientists to speak in front of thousands of attendees.

It has been 24 years since Hadi Matar was born. She is of white ethnicity and American nationality, and was born in the United States. It is for this reason that her true date of birth and her zodiac sign are unknown.

Due to the fact that Hadi Matar has prohibited the media from obtaining information about his family, no information is currently available.

The sons of Hadi Matar

No information on Hadi Matar’s marital status can be found. If we find out any new information about his relationship, we’ll be sure to let you know later.

What is Hadi Matar’s work history and what does he do for a living?

Salman Rushdie was assaulted while giving a speech on Friday and is currently undergoing medical treatment. There are what appear to be bloodstains on the other side of the screen from where Rushdie was sitting. Police said Matar stormed onto the stage and began attacking the writer after she finished speaking.

Hadi Matar, 24, from New Jersey, has been recognized as the culprit in the attack on Salman Rushdie. The investigation currently involves police searching properties that are connected to the suspect. The evening will begin with a prayer vigil for Salman Rushdie, which will be attended by a large crowd.

Hadi Matar has been quite secretive about his financial situation. As a result, it is challenging to calculate his net worth.

What elementary, middle, and high schools did you attend?

The primary school, high school and university that Hadi Matar attended and graduated from are under investigation. From this fact, we can safely assume that she completed all of her formal education in her birthplace.

What ended the life of the well-known American comedian Teddy Ray, who was only 32 years old, and how did he die?

Is it possible to connect with him through any of the various social media platforms?

After conducting a cursory search, we searched for Hadi Matar’s presence on various social media platforms, but were unable to identify any where he might be active.

External appearance of Hadi Matar, including his height, weight, and age

Not currently available in height

The tone of black hair.

The type of body that suits

There are some fascinating things to know about Hadi Matar.