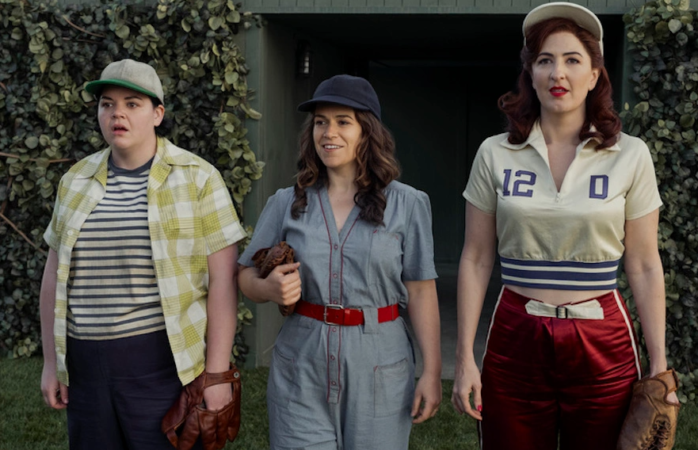 The documentary “A League of Their Own” on Amazon Prime Video tells the story of female baseball players in an All-American women’s professional league. The show, which is partly based on true events and has some parallels to Geena Davis and Tom Hanks’ 1992 film, employs its long-form framework to delve into its characters’ struggles both personally and professionally. It explores the difficulties women had to overcome to be taken seriously while trying to keep things as realistic as possible. The series shifts its focus to the lives of Greta Gill and Max Chapman as well as Carson Shaw. Here’s what you need to know if you’re wondering if they’re based on real people.

Is Greta Gill based on a real baseball player?

Greta Gill, a fictional character, is not based on a real person; rather, she serves as a representation of the numerous baseball players of the time who were openly gay but hidden. The show’s star and co-creator, Abbi Jacobson, stated during a podcast interview for The Last Laugh that the sitcom would heavily emphasize homosexuality. When it comes to LGBT and black characters in particular, the show goes above and beyond what wasn’t adequately addressed in its source material, even though it borrows elements from the 1992 film of the same name. “Believe it or not, a lot of the female baseball players were lesbians! We’re not trying to sabotage the movie. We’re just trying to dig a little deeper and learn a little more about what was really going on with these women, Jacobson said.

Unlike her previous characters, D’Arcy Carden, who plays the lovable Greta, found this role different and refreshing. She played baseball when she was younger and saw this position as an opportunity to fulfill her goal of playing baseball. She watched “incredible actor performances” to prepare for Greta. The fact that I thought, “This character is George Clooney,” is my little secret. Greta is great. She is attractive, but not too attractive. How could a man portray her? I know how to play a “cool guy,” but I don’t know how to play a “beautiful woman,” she said. As a result, she was able to steer her away from her favorite role of Janet in “The Good Place.” Carden continued, “I was thinking, I think I need to do something like this to get rid of all the ‘she’s not a girl!’ she comments on my Instagram.

Is Max Chapman based on a real baseball player?

Three real baseball players, Mamie Johnson, Toni Stone and Connie Morgan, who later played in the Negro Leagues, combined to create Chanté Adams’ Max Chapman. Black women were not allowed to participate in the women’s baseball league at the time due to segregation. This is acknowledged in the 1992 film during a moment where a black woman shows off her talent with an impressive throw; this sequence also acts as Chapman’s introduction to the Amazon series.

While the film doesn’t explore racism further, the show specifically crafts a plot that focuses on Chapman’s progress. “Historically, black women were not allowed to try out for the All American Girl’s League. Really, it was more of a white pass thing. So which route did they take? Building a new character that was inspired by them and closely following her journey in locating her team was an incredible story. How does that appear? Abbi Jacobson said.

Adams saw this as an opportunity to stand up for black women in sports and all the challenges they had faced. There were black women there who tried to join those teams but were unsuccessful. And what happened to their stories? There have only been three black women who have played professionally in Major League Baseball. Unfortunately, we do not know their names. Max is replacing them, she claimed.

Chapman’s personal life is further complicated by the fact that he is gay in addition to being a black baseball star. Adams believes that her journey will inspire others as she tries to understand who she is and where she belongs. and people of color. When it comes to her goals, Max is a person who has everything against him. There are so many barriers in her way, but nothing about her will stop her from pursuing her dreams as she has faith in herself. She is aware of how demoralizing it can be to hear a no, but she also knows that if she keeps trying, she will eventually get to the point where she says yes.