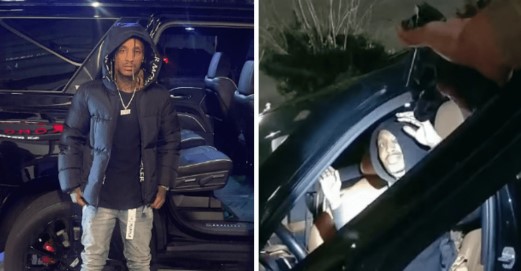 Los Angeles rapper Feezy Lebron was threatened with being shot by two deputy police officers on December 31, 2022, claiming he would “get one in the chest” if he failed to get out of his parked vehicle. According to the Daily Mail, the agent said: “If you leave in this car, I will shoot you. I will make it very easy for you. If you put this car in gear, you will get one.” straight to the chest.” To which, the rapper asked, “Are you going to shoot me?”

Absolutely. Absolutely,” the agent replied. He added: “If you don’t listen, you’re finished. You understand me?” The rapper posted the incident on Instagram, writing: “Two cops held guns to my face and threatened to shoot and kill me for sitting in my own car smh… #2023 feels like 1923 #explore #explore.” Meanwhile, the Los Angeles County Police Department claimed they are investigating the incident and also released the body camera footage.

Lebron also claimed he was using his cell phone and was sitting in his car in a parking lot in the 14900 block of Crenshaw Boulevard The second officer can be heard saying, “I’m just going to spray you. Get out or you’ll get sprayed.” The deputy also said, “I don’t care if you’re bullshitting with you, but guess what bro, now you gotta deal with it. But if you throw some bull**t, you’re going to get one in the chest.” ,

“So you’re going to shoot me? I’m sitting in the fucking car, bro, I’m sitting in the fucking car,” the rapper said. Lebron then wondered, “So am I under arrest or what, bro? You got me with guns….” The deputy then said, “He’s definitely 1,500 percent detained.” “If he does anything different than what he’s doing right now, he’s going to have some major problems,” the deputy said.

The agent added, “Unfortunately for you, you shouldn’t smoke weed in your car that much and then we wouldn’t have to search you,” to which the rapper replied, “I didn’t smoke weed in my car, it’s not illegal.” asked the rapper, “Do you have anger issues?”, according to KTLA. However, Lebron was not arrested and was cited for missing a license plate. He was later released.

In a statement released by LASD, he says, “During contact, officers ordered the man out of his car. An officer displayed pepper spray, then drew his firearm and used unprofessional language, which later resulted in a complaint being filed by that community member. Sheriff (Robert) Luna has made it clear that he expects Department personnel to treat all members of the public with dignity and respect, and that personnel who fail to meet our training standards will be held accountable.”

He later posted: “(PLEASE SHARE) Let’s get this guy’s face out before he has a chance to MURDER a young black man sitting in his PARKED car…Unarmed…he approached my car for no reason …didn’t know I was still LIVE…remember they just want a reason to KILL YOU ??…this is the norm (their names and badge numbers officer #1 Justin Sabatine 623021…Officer #2 Jacob Ruiz 663350 South Los Angeles Sheriff’s Station #explore #explorepage .”

Read Also: Who was Logan Rocklin? Wiki, Biography, Age, Family, Cause of Death