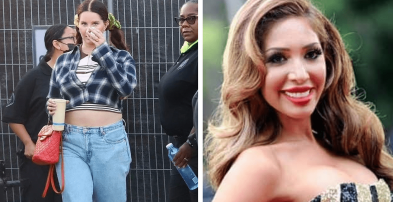 Body shapes and sizes are not meters to judge a person’s talent. This fact might not be too clear to former ‘Teen Mom’ star Farrah Abraham. The internet was furious after he reportedly made comments about the body of Grammy-nominated singer Lana Del Rey.

The ‘Summertime Sadness’ singer was recently spotted at the annual Malibu Chili Cook-off, wearing a brown and pink polo shirt cropped with a blue plaid cropped flannel and high-waisted blue jeans. She accessorized her dress with a red bag and two ponytails. Seeing Lana’s photo, the ‘Teen Mom’ star couldn’t help herself. She took to Instagram to caption the picture of her on her story saying, “Is this real?” with a shocked emoji.

Fans wasted no time calling out Farrah for her “body shaming” comments, venting on Reddit. Hitting Farrah, one captioned the screenshot of Farrah’s Instagram story, saying: “After all the posts from her about being a feminist and advocate for women, cute.” “She hates herself enough to make fun of someone who is f*cking beautiful by the way,” said another user. Others claimed that the usually toned and fit Farrah will not understand that “not everyone is addicted to plastic surgery.” Many even applauded Farrah’s physical and mental health. One says, “Let’s be honest. Farrah doesn’t know what reality is, mentally or physically.”

Fans showered Lana with love saying that she looked completely normal and beautiful. One responded to the candid photo of her and said, “What is she real? This person looks real to me.” Another praised her appearance saying, “She looks confident.Fans criticized Farrah claiming that she was “projecting her own insecurities onto other women”. One fan wrote, “She’s a narcissist who can only gain her self esteem by doing stuff like this.” One user claimed that all of Farrah’s worth was based on vanity alone, therefore she “has done herself a great disservice with endless cosmetic surgeries.”

Farrah has gone through various fillers and correction procedures. She recently underwent a “buttock correction” procedure. In 2012, she underwent rhinoplasty and a chin implant. She also underwent a breast operation that was later corrected. The ‘Teen Mom’ star also underwent liposuction and various other fillers on her face. After learning all these facts, a fan criticized Farrah, saying, “Farrah is made of plastic.”