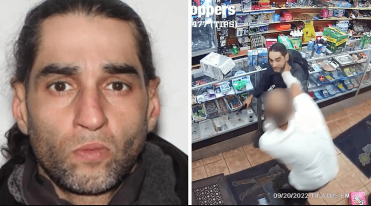 Edwin Pedroza,  of the 100 block of Lafayette Avenue, has been charged in connection with the fatal stabbing at 4th Avenue Tobacco Road Corp near President Street in Gowanus on September 20. Pedroza has been charged with manslaughter and criminal possession of a weapon, the NY Post reported. With the help of surveillance footage from the store, investigators were able to identify Pedroza just days after the brutal stabbing.

The events occurred on September 20, around 11:30 p.m., when the victim, identified as Joan Núñez, 37, opened the door of the tobacco shop for Pedroza. But Pedroza walked straight into the store without saying thank you, and when Nunez confronted him, she verbally assaulted him, sparking a heated dispute between the two. Eyewitness and employee Kharef Alsaidi told ABC: “It was just about not saying ‘thank you for opening the door for him.’

Sharing more details, Alsaidi quoted Nunez as saying, “Why don’t you just say, ‘Thanks for opening the door’?” To which the suspect replied, “I didn’t tell you to open the door for me.” The NYPD has also released video in which Nunez, wearing a white T-shirt, can be seen in a physical dispute with Pedroza, wearing a black T-shirt, inside the smoke shop.

At one point in the video, Pedroza is seen pushing Nunez off the wall and raising his hands.After a few moments of confrontation, the dispute ended in a physical altercation that soon moved outside the store. In an assaultive attack, the victim asks the suspect to stab him if he can. The suspect quickly runs to his electric bike to grab a knife and stab the victim’s abdomen and neck.