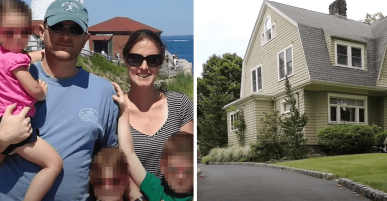 With a new strategy of breaking viewership records, Netflix recently launched its chilling new mystery series ‘The Watcher’, injecting a new aspect into the true crime genre by shedding light on a true incident. Created by Ryan Murphy and Ian Brennan, the eight-episode series retains the basic structure of a 2018 article for Reeves Wiedeman’s New York ‘The Cut’. The series follows the story of the Brannock family, who move into their dream home in Westfield.

NJ. But instead of receiving housewarming gifts, the family receives a series of horrifying and threatening anonymous letters. The real-life case incident from 2014 drew interest from mainstream media and conspiracy theory YouTube channels alike. While the series managed to garner huge applause from critics, it somehow disappointed the audience with its ending. But is it the true ending? If not, what is the status of the actual ‘The Watcher’ case now? Read on to find out.

The hair-raising ordeal began in 2014 when a loving couple, Derek and Maria Broaddus, poured every penny of their savings into buying their $1.3 million dream home in Westfield, New Jersey, located just blocks from where Maria grew up. The couple and their three children moved into their dream home at 657 Boulevard, unaware of the series of vicious incidents that were to befall them.

During the renovation of the house, the family received the first letter outlining the history of the house and warning, “You don’t want to make 657 Boulevard unhappy.” Signed “The Watcher” and sent with no return address, a later letter properly identified the names of the Broaddus children, asking about “the young blood I requested”.

Soon, they received a second letter that listed their children and detailed every minor detail about them. They soon received a third letter saying that they knew the family was not planning to move into the house. All the horror letters were written in the same crude handwriting and had a signature of The Watcher, written in cursive.

Frightened by the letters, the couple contacted the family who lived in the house before them to ask about the letter. The family also revealed that they received a strange letter just a day before they moved in. The couple then decided to hire a private investigator to discover the identity of the suspicious observer.

But when their investigator couldn’t pick up any leads, Derek and Maria went to the police, who immediately launched an investigation into the matter. The search raised suspicions in every corner of the Westfield neighborhood surrounding 657 Boulevard. From mail carriers to service providers, every individual was questioned by officials during the search.

After months of investigation, when the investigator was unable to find a solid lead, the case was turned over to the Union County Prosecutor’s Office, which started the investigation from scratch. However, the result was still the same. But a new ray of relief came for Derek and Maria when The Cut’s 2018 article led to the latest prosecution-run trial.

During the investigation, the forensic team found a DNA sample on the bottom flap of one of the envelopes the couple received. DNA tests revealed that it was a woman who had sealed the envelope with her tongue. Following this lead, the prosecutor voluntarily asked members of the community for DNA samples. A month later, although the neighbors were cooperative, none of them had found a DNA match.

Tired of all the research, the Broadduses decided to sell their dream home. In March 2019, the Broaddus family finally sold the infamous property for approximately $959,000, according to Zillow, below the already discounted asking price of $999,000.The Broaddus family reportedly asked the prosecutor’s office two years ago to close the case and turn over the letters and DNA evidence to them so that they themselves could give it to the forensic genealogy company.

But the office refused to release the evidence, saying that while the investigation is not active, it is not closed Now the case can only be solved by a confession or a DNA match. The family said their application to the prosecutor’s office is still standing. However, the identity of ‘The Watcher’ remains a mystery.