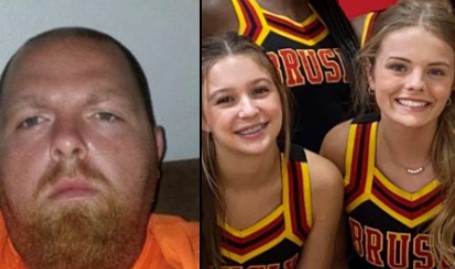 A police officer has been charged for his role in the deaths of two teenagers during the high-speed pursuit of a home invasion suspect in Louisiana. Officer David Cauthron, who works for the police in the Addis community, was arrested Sunday night, WBRZ-TV reported.

He is charged with two counts of negligent homicide and one count of negligent injury, District Attorney Tony Clayton told the station. It was not clear Monday if Cauthron had an attorney to speak on his behalf. Maggie Dunn, 17, and Caroline Gill, 16, were killed when their car was struck by a police cruiser Saturday morning on a state highway. A third person in the car was seriously injured.

At the time, the police were chasing a 24-year-old suspect. The chase began in Baton Rouge when the suspect stole a car after breaking into a home and taking the keys, police said. During the chase through several parishes, the Louisiana counties version, the 24-year-old ran red lights and reached a speed of 110 mph (177 kph), according to police documents.

As police chased the man through the town of Brusly, an Addis police vehicle crashed into another vehicle, killing the two teenagers, who were not involved in the robbery, The Advocate reported. The man drove the stolen car back across the Mississippi River and was pulled over when the vehicle came to a stop. He will be charged with two counts of manslaughter, as well as burglary, burglary and aggravated flight, police said.

On Sunday, Clayton questioned the police’s decision to pursue the driver at high speeds and agreed with the decision to arrest the officer.