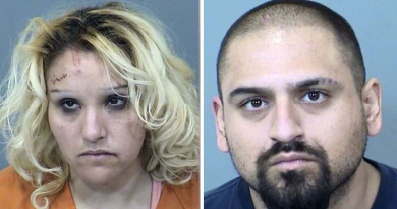 A couple was arrested for stealing from a man, whom the woman met on a date through Tinder. Crystal Hulsey, 33, and Jose Sandoval Jaquez, 32, took the victim’s car and $3,000. The duo are now charged with assault, armed robbery with a deadly weapon, kidnapping and two counts of vehicle theft. Narrating the details, the victim told police that she agreed to meet Hulsey, who introduced herself as Sonya on the application, at the Embassy. Suites near Camelback Road and 26th Street in Phoenix around 10 a.m. on September 17.

After arriving at her destination, he was directed to the woman’s room. She went to her room and was greeted by another man, Jaquez, who pointed a gun at her and demanded her cell phone, ID, and social media and banking information. The two suspects then made him take them to a nearby Chase Bank and give them $900. After leaving the bank, the two escaped in the man’s red Scion and withdrew an additional $2,100 from his bank account using online applications. The man then called the police, AZ Family reports.

The suspects were identified five days after authorities said the couple used their real names for the hotel and when they withdrew money from the victim’s account, according to the NY Post. The victim provided bank statements showing Zelle and Cash App withdrawals from her account under partial usernames.

Investigators found that the usernames matched accounts belonging to the suspects, Fox 10 reports. The outlet further claims that Hulsey and Jaquez took the car to California and Las Vegas, where officers tried to stop them. However, they escaped and left the car behind as they headed back to Phoenix.

Following this, an advertisement for an escort with Hulsey’s contact number was found online. Phoenix police officers investigated the ad and set up a location to meet with the female suspect. While waiting for her, Jaquez was identified in a Nissan Rogue at the La Quinta Inn near Interstate 17 and Thomas Road.

He was driving the SUV. When police tried to arrest the suspects, they again fled the scene and were seen driving on the wrong side of the road. They then traveled west on the eastbound lanes of Jefferson Road, approaching 27th Avenue. “Passengers in the Nissan Rogue stopped in front of a vehicle and caused a vehicle to stop.

At that time, a “Department of Public Safety helicopter landed and apprehended the suspects at Happy Jack.” Police found the car on Sunday, October 2, according to court documents. “Jose said he knew this would come back for him,” police said.