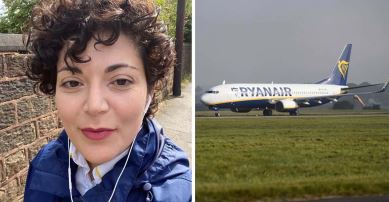 A Ryanair hostess named Cinzia Ceravolo was struck by a vehicle while departing from Liverpool John Lennon Airport and is now in critical condition. The incident took place on Monday night, August 22, at around 11.45 pm. After hearing accounts of an accident, rescue personnel flocked to Hale Road near the airport to offer help.

The 36-year-old woman was discovered hurt at the intersection of the road and the airport gate after being struck by a car, which was identified as a Ford Focus. Ceravolo suffered severe brain damage and was brought to the hospital, where she is currently in a serious state.

Ceravolo, of Italian origin who immigrated to the UK five years ago, lives in the southern region of Liverpool and works as a flight attendant for Ryanair. She had returned from a two-day business trip when her Ryanair plane from Dublin landed at Liverpool airport at 11:20 p.m.

According to the authorities, a person could have been present at the scene of the accident who could give an account of the details of the incident. Merseyside Police are also searching for the driver of a white hatchback car who allegedly may have witnessed the collision. “Investigations into the incident are ongoing. We are anxious to speak to a pedestrian who was walking on the sidewalk near where the collision occurred,” said Detective Sgt. Paul Evans of the Serious Collision Investigation Unit. “We’d also like to speak to the driver of a white hatchback passing by after the collision, heading towards Dunlop Road. Anyone who thinks they witnessed something or has dash cam footage and hasn’t come forward yet is asked to get in touch with a matter of urgency.”

Officials have asked citizens to call SCIU on (0151) 777 5747 or email SCIU@merseyside.police.uk if they saw the crash or have relevant surveillance or dashcam footage. If you prefer, you can also send a DM @MerPolCC with the reference 22000621301. Police authorities issued a statement on Tuesday, August 23, which read: “The victim has been taken to hospital with head injuries and is described in critical condition. “The driver, a 30-year-old man from Speke, was arrested at the scene on suspicion of causing serious injury by dangerous driving and drug driving. He has been taken to a police station and remains in custody.”