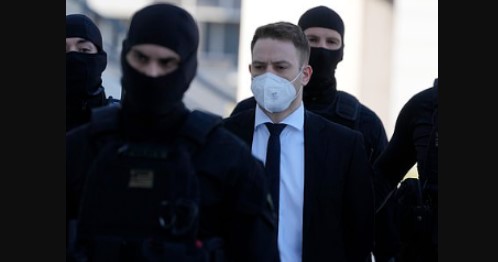 The father of Caroline Crouch, the British woman who was murdered by her Greek helicopter pilot husband as he slept in their Athens home, has claimed his daughter died because her confessed killer became involved in drug smuggling.

Speaking publicly for the first time, David Crouch, 79, said his imprisoned son-in-law, Babis Anagnostopoulos, had gone so far as to give a detailed account of the events leading up to Caroline’s death in a typewritten letter. “I have a letter from Babis telling me what happened,” he told local television station ANT1.

Caroline Crouch Cause of Death

For nearly six weeks after the May 2021 murder, Anagnostopoulos maintained that the burglars had broken into the couple’s suburban duplex, used duct tape to tie them up. he picked up, fatally suffocated the 19-year-old Brit and dangled her beloved pup from the villa’s railing.

It was only when he was faced with inconsistencies in his version of events that he finally confessed. Before being convicted of premeditated murder and sentenced to 26 years in prison, Anagnostopoulos told a Greek court that he had killed his wife in a “hazy state of mind” after a heated late-night argument.

The murder, described by a state coroner as a prolonged, agonizing death, was one of dozens of femicides in Greece that year. David Crouch, a retired oil and gas executive who lives on the island of Alonissos in the Greek Sporades, alleged that the helicopter pilot’s involvement in drug trafficking was behind the death of his daughter.

“I’ll tell you why he murdered Caroline in front of her son…he was involved with a drug gang,” he said. “There was a restaurant that Caroline and Babis used to go to, and the man who owned the restaurant was involved in drugs. He talked to Babis and told him that the gang he was involved in needed a helicopter pilot and that it was a job for which he would be paid a lot of money…

Babis was very stupid. Instead of keeping his mouth shut, he told Caroline.” The Briton reacted by threatening to leave him immediately, his father said. He said the gang told Anagnostopoulos that he would have to get rid of his wife.

“And so in the end he killed her. That was the only reason he killed her, because he thought if he didn’t, both he and Caroline would be killed by the drug gang,” Crouch said.

The revelations come less than two weeks before a custody battle over his daughter Lydia resumes in a Greek court. Anagnostopoulos’s schoolteacher mother and civil engineer father have appealed a decision giving the Crouch family sole care of the child.

Anagnostopoulos, 35, who is being held in a high-security prison in central Greece, is also seeking to overturn his sentence before an appeal court next month. When asked for a response to the allegations, Anagnostopoulos’ lawyer, Alexandros Papaioannidis, said Crouch was motivated by the upcoming hearings. “

They were never included in the case file and do not reflect reality,” he said Thursday. “Where is the letter? The father has his own reasons for making such claims. we have a small favor to ask. Millions turn to The Guardian for quality, independent and open news every day, and readers in 180 countries around the world now support us financially.

We believe that everyone deserves access to information based on science and truth, and analysis based on authority and integrity. That’s why we made a different decision: to keep our reports open to all readers, regardless of where they live or what they can afford. This means that more people can be better informed, united, and inspired to take meaningful action.

In these perilous times, a truth-seeking global news organization like The Guardian is essential. We have no shareholders or billionaire owners, which means our journalism is free from commercial and political influences, which makes us different. When it has never been more important, our independence allows us to fearlessly investigate, challenge and expose those in power.