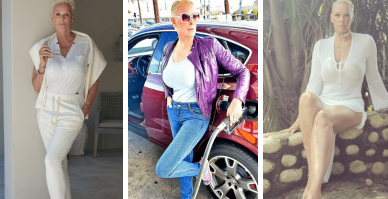 While raising kids can be hectic for many celebrities, that’s not the case for Brigitte Nielsen. The Danish model has found new happiness raising her four-year-old daughter Frida. The 59-year-old star said raising her has given her new energy and that’s why she’s excited to wake up every day. She also revealed how people doubt her ability, especially men, to raise a child at her age.

The ‘Red Sonja’ star told The Sunday Times: “Men say to me: ‘You’re almost 60 years old and you have a four-year-old son. Why aren’t you exhausted?’ I tell them: ‘I am a woman’. Mothers are strong. Before giving birth I did think: ‘How am I going to do this? This is going to be exhausting’, but I just turned 59. and she gives me so much energy. Since he was born, I wake up excited every day.” Nielsen also said that Frida brings an “incredible amount of calm energy” to him. The actress, who was briefly married to “Rocky IV” and “Cobra” co-star Sylvester Stallone, is now the mother of five children. She was recently seen on a beach in Marbella on September 4, accompanied by her husband Mattia Dessi and Frida.

Nielsen welcomed Frida in June 2018 after a decade-long IVF battle, which she said was not easy to navigate. In 2019, she told The Guardian: “You’re taking a lot of medication. It’s very expensive. Hormones will do different things in different women… you always think you’re going to get pregnant, but most of the time, the phone call comes.” and it’s, ‘I’m sorry.’ It’s devastating. The partner you’re with has to be on board as much as you are, unless you’re a woman who wants to have a baby on your own. You have to be realistic, and if you’re older , the odds are against you.”

She explained how Dessi fully supported her and how they were told that they only had a 2.5 percent chance of conceiving. She continued, “I always said, I want to do it until there are no more embryos left. Someone has to win the lottery.” She even compared her struggle to that of other male actors who fathered a child much later than Nielsen. She continued: “When people say you were 54, yeah, well, what about all the men who are 60, 70 or 80? I saw Jeff Goldblum recently, who just fathered his second child at 64 , and I was like, ‘Jeff! How are you, old daddy?'” Nielsen is the mother of Julian Winding, Frida Dessi, Killian Marcus Nielsen, Aaron Nielsen and Raoul Ayrton Meyer Jr.