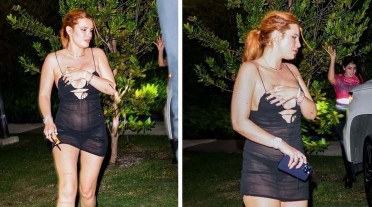 Bella Thorne knows how to give the best of herself in each of her looks. The sheer little black dress the actress wore to a party she attended after Art Basel weekend was a stunner! Thorne was seen leaving the venue as she returned to a car she was waiting for after partying late into the night. Thorne was reportedly partying with big names like Kim Kardashian, Khloe Kardashian, and Madonna.

The ‘Shake It Up’ actress headed first to a celebratory dinner that honored designer Fausto Puglisi’s inclusion at high-end fashion label Roberto Cavalli. For the occasion, she donned a shimmering custom gown by Cavalli, which featured a wild edge due to the striking zebra print. While that outfit got everyone’s attention, it was the sheer dress she wore to Art Basel later that night that had everyone swooning.

The ‘Dirty Sexy Money’ actress was seen wearing a see-through dress and a black bikini underneath. She was decked out in accessories from her own line of Thorne Dynasty accessories.

Most recently, she launched the second part of her jewelry line which has many unique barbed wire shaped necklaces and dagger earrings. Interestingly, the line also has a rose gold joint holder for sale.

She also launched her ‘Queen’s Bounty’ collection recently, for which she posted a promo video on Instagram captioned, “VOL. II Queens Bounty is out now. See what’s lurking at THORNDYNASTY.COM.”

For the actress and model, these two successful ventures may just be the beginning. She has also expressed her interest in creating a lingerie brand in an Instagram post. She said: “I want to start my own lingerie company. And I want it all made in Italy”.