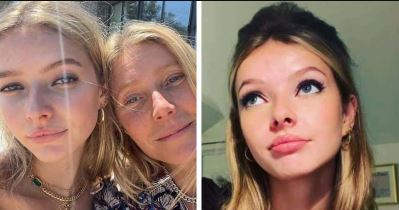 Chris Martin and Gwyneth Paltrow’s daughter, Apple Martin, recently threw a wild party in The Hamptons that was shut down by police. On August 13, 2022, Apple hosted about 50 friends at her mother’s Amagansett estate, according to a Page Six report. Furious at the commotion, neighbors reportedly ended up calling the police. The police stopped the party and allegedly fined the star’s daughter. Employees from the city clerk’s office also attended the party to see if there were any violations. “You can’t have more than 50 people at a gathering in the area without a permit,” they said.

Apple’s mother, Gwyneth Paltrow, and her stepfather Brad Falchuk are not believed to have been home during the party. “They were partying like rock stars and making so much noise that several neighbors got mad and called the police, who shut down the party,” a source told Page Six.

However, a spokesperson for the East HamptonTown Ordinance Enforcement Department confirmed that they were sent to the property after receiving noise complaints. The department, which provides permits for community events, told the site: “We went to [Paltrow’s] house after noise complaints. When we got there, we found there were less than 50 people there, so They were in the code. If anyone got a ticket, it would be from the police.” East Hampton Police did not provide any comment to the site.

Apple is the daughter of Oscar winner Gwyneth Paltrow and her ex-husband, Chris Martin. The ‘Shakespeare In Love’ actress also has a son named Moses, 16, with Martin. She was married to Martin for 11 years before their infamous “conscious uncoupling,” followed by their divorce in 2016. Gwyneth has been married to producer Brad Falchuk since 2018. In May 2022, Gwyneth paid a gushing tribute to her daughter in honor to her. 18th birthday, she wrote, “18. I was a little speechless this morning (?).

I couldn’t be more proud of the woman you are. You are everything I could have dreamed of and so much more. Proud doesn’t cover it, my heart goes swells with feelings that I cannot express in words. You are profoundly extraordinary in every way. Happy birthday my dear girl. I hope you know how special you are and how much light you have brought to all who are lucky enough to know you. Especially to me. I say it all the time and I’ll never stop… in Aunt Drew’s words, I was born the day you were born. I love you. ?? Mom.”

The mother and daughter duo share a beautiful relationship with each other. Paltrow often posts photos with her daughter and her son, appreciating her existence in her life. Meanwhile, fans will soon see Paltrow on the small screens as a guest shark on the upcoming season of ‘Shark Tank.’ It is the first time that the actress will appear on the show. Paltrow founded Goop, a wellness and lifestyle brand in 2008. It started as a weekly email newsletter and grew into a website and e-commerce site.

Goop also has its own products, a magazine, a podcast, wellness summits, and a Netflix documentary series. Apple keeps her social media accounts private and when Paltrow once shared a photo of her on her 15th birthday, she commented on her photo saying, “Mom, we’ve discussed this. You can’t post anything without my consent.”