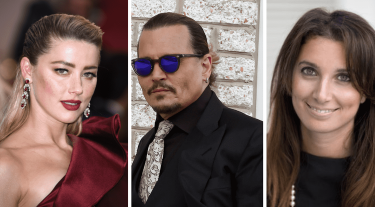 Amber Heard reportedly has nothing to say about her ex-husband Johnny Depp’s alleged new affair with a married lawyer. The ‘Pirates of the Caribbean’ star is said to have started dating lawyer Joelle Rich, who worked on her UK libel case against The Sun’s publisher, News Group Newspapers, in 2020.

However, a source told Entertainment Tonight that the ‘Aquaman’ actress isn’t bothered by this new development. They said, “Amber is not paying attention to Johnny or his personal life. She doesn’t care who he dates and just wants to get on with her life.”

The source’s statement came after another source gave details about the apparent romance between Depp and Rich. They told Us Weekly: “Their chemistry is off the charts. It’s serious between them. They’re the real deal.” Rich was reportedly part of a team of lawyers that represented the 59-year-old actor in the UK after he was called a “wife beater” by the Sun. Although Depp lost him, it appears that found love in the midst of confusion.

Rich was not part of the legal team that defended the ‘Edward Scissorhands’ star in the libel case he fought against Heard in Virginia earlier this year, but was reportedly seen in the courtroom to show her “support.” to Depp. The source claimed: “There was no professional obligation for her to be there. It was personal,” who also added that the two met “discreetly” in hotels when they first started their relationship.

The 36-year-old had also told PEOPLE: “I guess she comes with the territory of being a woman who just does her job. It is disappointing that certain outlets accepted it or said that my interactions with Johnny, who is a friend and who I have known and represented for four and a half years, that my interactions were somehow inappropriate or unprofessional. . It’s disappointing to hear that.”

“I care a lot about my clients, and obviously we’ve become close. But when I say us, I mean the whole team and of course that includes Johnny. And, I am Cuban and Colombian. I’m tactile. What do you want me to tell you? I hug everyone And I’m not ashamed of that. This man was fighting for his life and it broke my heart to see him day after day sitting there and listening to the most horrible accusations being made against him. And if I could give him a little bit of comfort, of course I would, whether it was holding his hand or letting him know that we were there and that we were going to fight for him because he deserved it,” Vasquez added in June. .