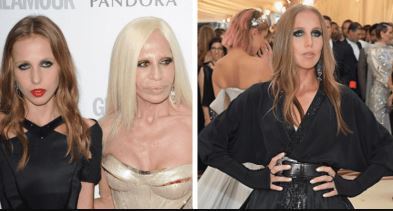 In a rare sighting, reclusive heiress Allegra Versace has been spotted out in public after years. The 36-year-old billionaire was seen walking in Milan’s Indro Montanelli Garden and was accompanied by a mystery man on Friday, September 2, 2022.

Allegra is the daughter of famous Italian fashion designer Donatella Versace and former American model Paul Beck. She is the niece of the late Gianni Versace, founder of the iconic luxury fashion company, from whom she inherited 50 percent ownership of Versace.

In the photos, both Allegra and the bearded man are dressed casually. She sported an oversized Lady Gaga tour sweatshirt with joggers while he wore a T-shirt with shorts. In contrast to her mother’s extravagant public appearances, the 36-year-old heiress lives a rather reclusive life, having disappeared from the public eye nearly a decade ago. Little is known about her private life and her activities. In fact, all mentions of her were cut from the miniseries, ‘The Assassination of Gianni Versace: American Crime Story.’ In a rare public statement, Allegra had declared, “Unlike my mother, I hate celebrities” in 2016, during the Met Gala.

Having inherited 50 percent ownership of Versace, she is the majority shareholder in the company. This came as a surprise to everyone when the will left by her uncle, the late Gianni Versace, stipulated that she would inherit 50 percent of it when she turned 18. The rest of the company’s shares were divided between Donatella and Santo Versace, who received 20 and 30 percent respectively.

Before her disappearance from public life, the media extensively covered Allegra’s struggle with anorexia. During her red carpet appearances with her mother and other members of her family, she received intense media scrutiny for her extremely slim body. The family also addressed the concern in a statement in 2007 saying, “Our daughter Allegra has been battling anorexia, a very serious illness, for many years. She is receiving the best medical care possible to help her overcome this illness and is responding right”. .”

According to news.com.au, a former Versace employee had told writer Merle Ginsberg: “If Allegra sees her own photos or sees herself on TV, she loses her mind. She has a disorder of body dysmorphia”. She also spoke about the heiress’s role in the company, saying, “They say she has a job at the company, but she doesn’t actually run anything at Versace.”