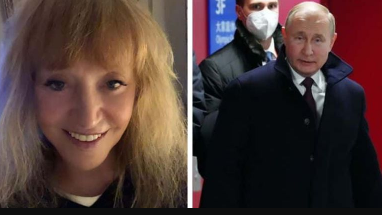 One of Russia’s best-known singers, in demand since the Soviet era, spoke out against the war in Ukraine and claimed that Vladimir Putin was pointlessly sending young people to die there. Alla Pugacheva, a Russian icon and pop star, said she wanted to join her husband on the nation’s foreign agent list through an Instagram post criticizing the Russian government. This is the first time that the pop star has publicly criticized the conflict.

Her husband, Maxim Galkin, was recently called a “foreign agent” for opposing the war, joining journalists, human rights advocates and critics of the Kremlin. Pugacheva wrote on Sunday, September 18: “The death of our boys for illusory purposes turns our country into a pariah and burdens the lives of our citizens.”

Pugacheva wrote to her 3.4 million Instagram followers while on her way to the Russian Federation Ministry of Justice: “I ask you to enroll me in the ranks of foreign agents of my beloved country.” She justified her point by explaining “because I am in solidarity with my husband who is an honest, decent, sincere man and a true and incorruptible patriot of Russia, wishing prosperity to the Motherland.” She further said that her husband wanted a “peaceful life, freedom of expression and an end to the killing of our boys for illusory goals that make our country a pariah and burden the lives of our citizens.”

Viv Groskop, a British comedian and journalist, referred to Pugacehva as the “Russian Dolly Parton”, emphasizing her star power and famous reputation in the nation. According to The Daily Telegraph, Alla Pugacheva “is the closest thing to universally loved national royalty” in Russia.

When the war started, Pugacheva and her husband left the nation.
Although it is not clear if she is still there, she was seen in Moscow on September 3 at the funeral of Mikhail Gorbachev.

The 73-year-old pop singer is well known for her vibrant performances and her soulful singing. She first gained notoriety in the 1970s and continues to enjoy great popularity in the former Soviet Union. Pugacheva quickly rose to fame as the best-known singer in the Soviet Union, selling over 250 million units in total and amassing a record collection of over 100 records, CDs, and DVDs.