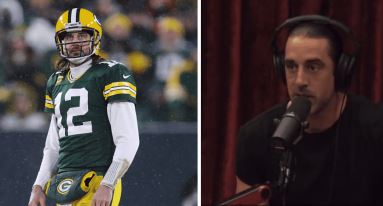 Aaron Rodgers, whose refusal to be vaccinated against Covid-19 made national news last year, revealed that the NFL discriminated against unvaccinated players. The Green Bay Packers quarterback appeared on “The Joe Rogan Experience” and admitted that the phrase “immunized” was intentionally misleading.

During the interview with Joe Rogan, the Packers quarterback and Rogan discussed the “vaccine misinformation” propaganda being put out by the mainstream media. Rodgers claimed he is allergic to polyethylene glycol, also known as PEG, which is a core ingredient in most coronavirus vaccines, including the Pfizer and Moderna Covid-19 vaccines. Rodgers said he did not take the mRNA Covid vaccines last season as the Centers for Disease Control and Prevention (CDC) recommended that people with PEG allergies not take the mRNA vaccines. However, he too refused the Johnson & Johnson vaccine due to blood clotting problems.

Rodgers also revealed that the league discriminated against unvaccinated players and gave vaccinated players special privileges. He said that he was forced to wear a mask at all times, while vaccinated players were allowed to roam without a mask. “There was a lot of public shaming that was attempted to force people to get vaccinated because they’re not just wearing a yellow wristband, they’re the only ones wearing masks,” Rodgers said.

Also, in the episode, Rodgers stated that the players in the bubble had no chance to exercise. He said unvaccinated

NFL players had a “very low rate of not only keeping a job but even getting a job.” “Look how fair our league is, we have 95% compliance with the vaccine,” Rodgers of the NFL scoffed. “If you don’t, we’ll send a puppet to your team to show you graphs of your team’s vaccination percentage compared to the rest of the league, what really happened.”

During the pandemic, the vaccine became a necessity and the media was after the players asking them about their vaccination status. To dodge questions from the media last year, Rodgers used the term “immunized” which he now revealed was initially misleading. “So he had been ready all along for this question and thought about how he wanted to answer it. I figured I was going to say, ‘I got vaccinated,’ and if there was a follow-up, I was going to talk about my process,” Rodgers said.

“But I thought there was a chance that, I say I’m immunized, maybe they understand what that means, maybe they don’t, maybe they follow up. They didn’t follow up.” About 39 minutes into the podcast, Rodgers made another mind-boggling confession that he played an NFL game with the Packers while on painkillers, specifically Percocet.

“It was more for pain control, so I wasn’t taking any high doses, but ultimately it was stupid,” Rodgers said. “Here’s the thing: I had knee problems for a long time and take anti-inflammatories. You’re taking anti-inflammatories, they all come with a warning: if you take this for more than a few weeks, you need to have your blood tested because it can damage your liver. There are so many things you can take now, anti-inflammatory things, things that are natural, that don’t cause harm to your body.”