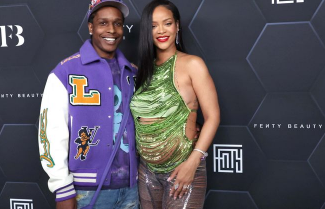 Rihanna and A$AP Rocky reportedly tied the knot without a prenuptial agreement in a very private marriage ceremony in California last April. The couple, who have been dating since 2020, were reportedly secretly married before having their first child together. A source revealed to Media Take Out that their secret wedding wasn’t actually that secret after all because it was filmed for Rocky’s ‘DMB’ music video.

“The footage in A$AP’s ‘DMB’ music video. was from the actual marriage ceremony. It wasn’t a video shoot, it was real,” the source claimed. In the DMB video, Rihanna and A$AP are seen getting married. Rocky looked dapper in a black suit and dark tie, while RiRi wore a red veil over a halter neck top or dress. A$AP also donned dark sunglasses and a custom grill that read “Marry Me” while Rihanna’s matching custom grill read “I Do.”

Meanwhile, a close friend of Rihanna’s revealed to Madia Take Out that there was no prenuptial agreement. “There was no prenuptial agreement. That’s how they both wanted it,” the source said. Media Take Out also reports that A$AP could be entitled to half of Rihanna’s wealth considering the couple married in California. Under California state community property law, both spouses are often presumed to own property obtained by either spouse during the marriage.

Without any agreement to the contrary, the court will assess the marital estate and impose a 50/50 division in accordance with Section 2550 of the Family Code, which mandates that the community estate be divided equally upon separation. According to Forbes, Rihanna was worth $1.7 billion in 2021, and by law, up to half of that belongs to A$AP. Most of Rihanna’s money is invested in her numerous successful businesses, including Fenty Beauty and Savage X. Over the past six months, both businesses have seen substantial growth, and A$AP is entitled to half.

Meanwhile, Rocky reportedly advised Rihanna not to get “too involved” in her legal proceedings for allegedly assaulting her friend in Hollywood in November 2021. A source explained to Hollywoodlife.com, “Rihanna isn’t getting too involved in the A$AP case because he told her that as much as he loves her, he doesn’t involve her. She has her plate full right now and they both We are confident that A$AP will walk free of these charges.” “

If Rihanna thought this was a serious situation, she would have left anyway, but she knows that going to court with him over this would just add a lot of unnecessary drama. If he felt like he needed her there, she would be there, but at this point, he’s not trying to drag her into anything. He has no doubt that he will be acquitted of this on his own merits. The best thing Rihanna can do is stay with her child and stay stress-free,” the source commented.