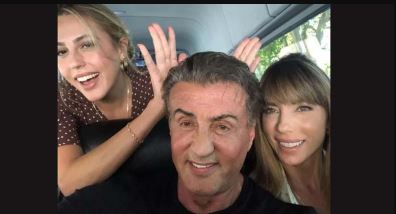 Sylvester Stallone posted some family photos on his social media to commemorate his daughter Sophia Rose’s 26th birthday while getting divorced. In honor of his daughter’s special day, which was August 27, the ‘Rocky’ star shared family photos of him, Sophia and soon-to-be ex-wife Jennifer Flavin on Sunday, August 28. “I love my family. We are approaching these personal issues in a friendly and private way,” the ‘Rocky’ star revealed to People after Jennifer Flavin filed for divorce earlier last week on August 19.

“A VERY HAPPY BELATED BIRTHDAY TO MY VERY SPECIAL DAUGHTER, SOPHIA!!!” Stallone, 76, wrote in the Instagram caption alongside a carousel of family photos. In one photo, Stallone and Sophia could be seen smiling broadly as they posed next to a golf cart while spending quality time together. In another, Stallone, Sophia and Flavin are seen taking a selfie while sitting in what appears to be a car. The group was seen to be in excellent spirits. The group is dressed to the nines in another photo from the post as they pose for the camera.

Flavin also posted photos of Sophia and an old photo of the mother-daughter team on Saturday in appreciation for her daughter’s achievement, but did not include any photos with Stallone. After Flavin filed for divorce from Stallone last Friday, August 19, the former couple’s ex-wife posted happy messages on social media. She filed a petition “for the dissolution of marriage and other remedies” for the actor in a court in Palm Beach County, Florida.

After their initial meeting in 1988 at a Beverly Hills restaurant, the couple married in 1997. They celebrated their 25th anniversary in May, at which point Stallone described Flavin as an “incredibly selfless, dedicated and patient woman.” In a now-defunct post, Flavin declared, “Our marriage just keeps getting better every year! I can’t wait to spend the rest of our lives together!”

The former couple also have two additional children, Sistine, 24, and Scarlet, 20. Seargeoh, a son from Stallone’s first marriage to Sasha Czack, is also their son. Sage, her eldest son with Czack, passed away in 2012. In an exclusive statement to People last week, Flavin said she will “always cherish” her relationship with Stallone. “I am sad to announce that after 25 years of marriage, I have filed for divorce from my husband, Sylvester Stallone. Although we will no longer be married, I will always cherish the 30+ year relationship we share and know we are both committed to our beautiful daughters.” “He said. “I ask for privacy for our family while we move forward amicably, “added the model.