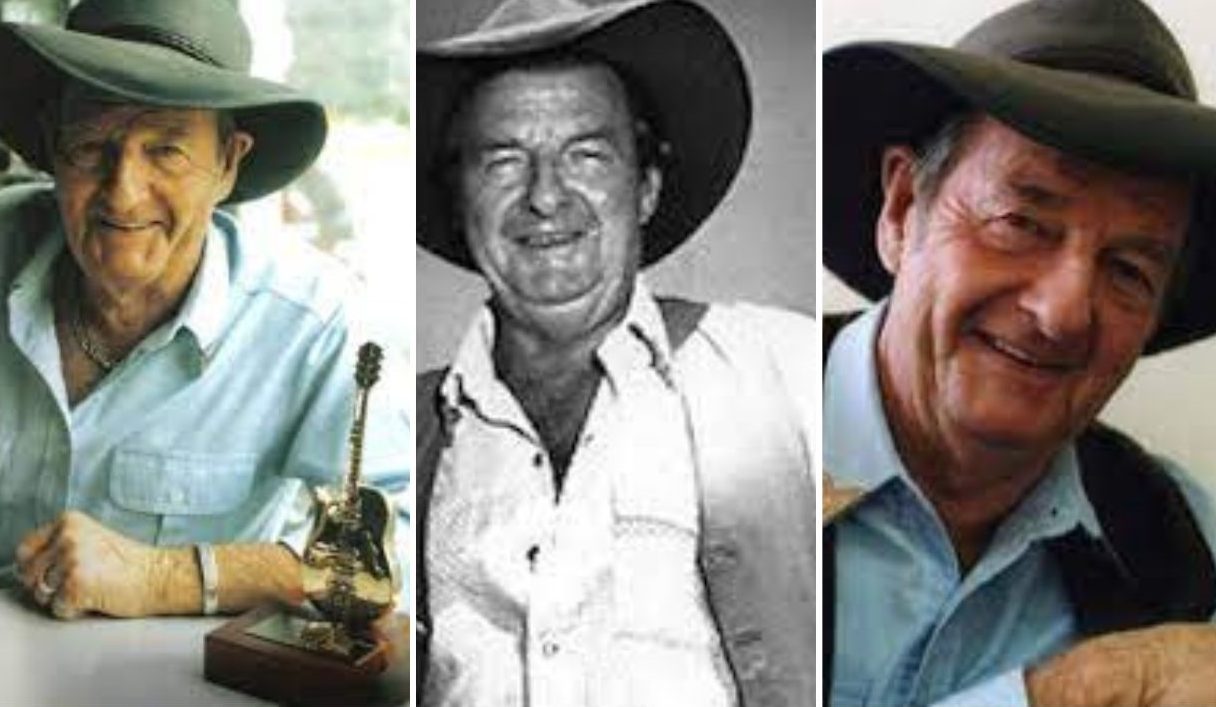 Slim Dusty was an Australian country music singer-songwriter, guitarist, and producer. He was born David Gordon Kirkpatrick on June 13, 1927, and passed away on September 19, 2003. He was awarded the Order of the British Empire (OBE) in 2003. After a career that spanned almost seven decades and included the production of a large number of recordings, he was a cultural icon in Australia as well as one of the country’s most decorated performers. It was well known that he recorded songs that were part of the legacy of Australia, particularly songs that were about the bush life and famous Australian bush poets like Henry Lawson and Banjo Paterson who represented the lifestyle. The musical style was first made popular by Buddy Williams, the first artist to perform the genre in Australia, and also for his many trucking songs. This style was given the name “bush ballad,” and it was used to refer to the music genre.

Slim Dusty is credited with having “released more than a hundred albums, selling more than seven million records, and earning over 70 gold and platinum album certifications.” His rendition of Gordon Parsons’ song “A Pub with No Beer” became the first song ever recorded in Australia to reach number one on the Billboard Hot 100 chart outside of Australia. He was presented with 38 Golden Guitar awards in addition to an award from the Australian Recording Industry Association (ARIA). The Australian Roll of Renown and the ARIA Hall of Fame both recognized his achievements and inducted him. Dusty, who passed away at the age of 76, was in the process of recording his 106th album for EMI Records when he was found dead. In 2007, his album sales in Australia surpassed seven million locally produced copies. During his lifetime, Dusty was revered as a significant part of Australia’s cultural heritage. During the closing ceremony of the Olympic Games in Sydney in 2000, he gave a performance of the song “Waltzing Matilda,” which is extremely well-known in Australia.

David Gordon Kirkpatrick, the son of a cattle farmer, was born on June 13, 1927 in Nulla Nulla Creek, which is located west of Kempsey in the state of New South Wales. His childhood home, now known as “Homewood,” has been preserved and is on the national register of historic places. Gordon, his middle name, was the name that most people called him. In 1937, he penned his first song, “The Way the Cowboy Dies,” and in 1938, when he was only 11 years old, he began performing under the name Slim Dusty. His earliest musical inspirations came from musicians Jimmie Rodgers from the United States, Tex Morton from New Zealand, and Buddy Williams from Australia. Dusty wrote “When the Rain Tumbles Down in July” in 1945, the same year he issued his first record as a recording artist, at the age of 19 years old. In 1946, he signed his first recording contract with Columbia Graphophone for the Regal Zonophone label. Columbia Graphophone was his employer at the time.

Rise to fame and enduring popularity

Dusty got married to singer and songwriter Joy McKean in 1951. With her help, he became very popular in Australia. In 1954, they both went into business full-time, starting with the Slim Dusty Travelling Show. Dusty’s wife and manager for more than 50 years was McKean. Anne Kirkpatrick and David Kirkpatrick, the couple’s children, are also good singers and songwriters.

Heather McKean, Joy’s sister and the other half of the McKean Sisters, got married to Reg Lindsay in February 1954. They got a divorce in 1985. Dianne Lindsay, the couple’s daughter, is also a country music singer.

Joy McKean wrote some of Dusty’s most popular songs, like “Lights on the Hill,” “Walk a Country Mile,” “Indian Pacific,” “Kelly’s Offsider,” “The Angel of Goulburn Hill,” and “The Biggest Disappointment.”

Even though Dusty was a good songwriter himself, he also worked with Mack Cormack, Gordon Parsons, Stan Coster, and Kelly Dixon, all of whom had little formal education but a lot of experience living in the Australian bush. Dusty told the story of how Australia changed quickly after World War II based on his travels and the works of other writers over a period of decades.

Still, when rock and roll music came along, the big radio stations in the cities stopped playing country music. Despite selling millions of records, Dusty was rarely played on the radio outside of regional areas in Australia after the 1950s.
“A Pub with No Beer,” a 1957 hit by Dusty, was the best-selling Australian record up to that point. It was also the first Australian single to go gold and the first and only 78 rpm record to get a gold disc.

(Slim was born in Kempsey, which is not far from Taylors Arm, where the “Pub with No Beer” is located.)
In 1959 and 1960, Flemish country singer, guitarist, and amusement park founder Bobbejaan Schoepen got Dutch and German versions of the song to the top of the charts in Belgium, Austria, and Germany. Some of these songs have stayed at the top for decades. In 1964, the Slim Dusty Australia-round tour began. This was a 48,280-km (30,000-mi) trip that took ten months and went around Australia. In 1984, a full-length movie called The Slim Dusty Movie was made about this event.

Dusty recorded songs that he and other Australian musicians had written, as well as poems by Henry Lawson and Banjo Paterson set to new tunes to bring attention to the old “bush ballads.” “The Man from Snowy River” by Paterson is an example. Scottish-Australian poet Will H. Ogilvie, Paterson’s rival for the title of Australia’s bush balladeer, wrote the 1980 album The Man Who Steadies the Lead and the songs The Pearl of Them All and The Man Who Steadies the Lead (1869–1963). Dusty was given the Order of the British Empire in 1970 for his contributions to music.

In 1973, at the first Country Music Awards of Australia, which were held at the Tamworth Country Music Festival, he won the award for Best Single (McKean won Song of the Year as writer of “Lights on the Hill”). By March 1976, Dusty had more gold and platinum records than any other Australian artist. He had 37 gold records and two platinum records.

The National Truck Drivers’ Memorial in Tarcutta, New South Wales, was a place that Dusty and his wife went to.

Bob Whitaker, who runs the Grand Ole Opry in Nashville, Tennessee, asked Dusty and his wife to perform in 1997. This was to honor Dusty’s 50 years of making country music. In January of the next year, he was made an Officer of the Order of Australia for his work in show business.

Dusty made his 100th album, Looking Forward, Looking Back, and put it out in 2000. He was the first artist in the history of commercial recording to do so; Cliff Richard was the second. All 100 albums were recorded with the same record label, EMI. This made Dusty the first musician in the world to record 100 albums with the same label.  Then, he was given the honor of singing “Waltzing Matilda” at the closing ceremony of the 2000 Summer Olympics. The whole stadium sang along with him—officially, 114,714 people, the most ever at an Olympic ceremony.

Slim played country gospel music, which he liked to play at the end of his shows.

His live albums usually had a Christian theme, and in 1971, he put out the Gospel album Glory Bound Train, which included the hit song of the same name and other songs with a Christian theme.

He died on September 19, 2003, at his home in St. Ives, New South Wales. He was 76 years old and had been sick with lung and kidney cancer for a long time.

On September 26, 2003, a state funeral was held at St. Andrew’s Cathedral in Sydney. The Prime Minister of Australia, John Howard, and the leader of the federal opposition, Simon Crean, were both there. Phillip Jensen, the Anglican Dean of Sydney, paid tribute at the funeral by leading family members, politicians, fans, and musicians in singing “A Pub With No Beer.” There were several tributes from Dusty’s children, as well as words from Peter Garrett and John Williamson and music from Graeme Connors, Kasey Chambers, and Troy Cassar-Daley, among others. Dusty’s body was burned at the Northern Suburbs Crematorium in Sydney after thousands of fans from all over Australia came to stand outside the cathedral.

At the time of his death, Dusty was working on his 106th album for EMI. The album Columbia Lane – the Last Sessions made its debut on March 8, 2004, at number 5 on the Australian album charts and number 1 on the country charts. After less than two weeks on sale, the item reached the gold level.

Columbia Lane is a tribute to the laneway next to Parramatta Road in Strathfield, near the railway bridge, where the EMI studios used to be and where he started his music career. The laneway is now home to Kennards Hire.

In Cunnamulla, Queensland, in 2005, a statue of the “Cunnamulla Fella” was put up as a tribute to Dusty and Stan Coster and to the famous song of the same name, which Dusty sang and for which Coster wrote the lyrics. In the 1950s, Coster worked as a “ringer” in the area of Cunnamulla where the song is set. Dusty recorded the song, and it became a big hit in country music. Lee Kernaghan later sang it, too. Anne Kirkpatrick, who is Dusty Kirkpatrick’s daughter, Jayne Kelly, and Tracy and Russell Coster unveiled the statue.

Slim Dusty was Australia’s most successful and prolific musical artist, with more Gold and Platinum albums than any other Australian artist He was also:

According the Country Music Association of Australia, Slim Dusty has won 44 Golden guitar plus, an induction into Australian Roll of Renown. (listed below). This is more than any other artist.

The Australian Entertainment Mo Awards (commonly known informally as the Mo Awards), were annual Australian entertainment industry awards. They recognise achievements in live entertainment in Australia from 1975 to 2016. Slim Dusty won two awards in that time. From 2006, the “best country entertainer” award was named in his honour.

The Tamworth Songwriters Association (TSA) is an annual songwriting contest for original country songs, awarded in January at the Tamworth Country Music Festival. They commenced in 1986. Slim Dusty won two awards in that time.