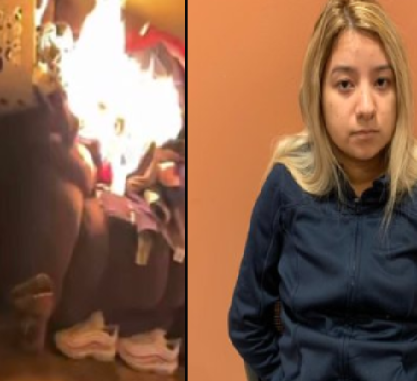 Senaida Soto, 23, was arrested after she allegedly started the fire at her San Antonio home on Sunday after thinking her boyfriend was cheating on her over the phone.

Shortly after allegedly setting fire to the sofa in a residence in the far southwest of the city early Sunday morning, Senaida Soto, 23, sent a text message to her boyfriend, writing: “I hope your house is okay.” , according to the Bexar County Sheriff’s Office.

Police allege the incident began after Soto FaceTimed her boyfriend and she became upset when another woman answered her phone. They added that the woman turned out to be a relative of Soto’s boyfriend. The homeowner called police to report that Soto had broken into her property, started the fire and stolen “various household items,” the sheriff said. the department said.

Members of the sheriff’s department, the Lytle Fire Department and the Bexar County Fire Marshal’s Office responded to the call in the 16000 block of Shepherd Road around 1:45 a.m. ”

While the house was on fire, video was taken and it was shown that she set fire to the couch which spread, causing the house to catch fire, as well as causing over $50,000 worth of damage,” the sheriff’s office wrote. on Facebook.