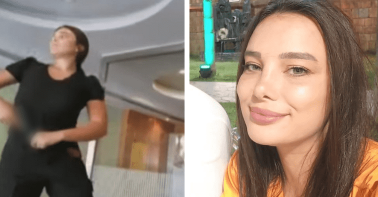 A 28-year-old activist allegedly robbed a bank in Beirut with a toy gun while walking away with thousands of dollars of money her family had deposited to pay for her sister’s cancer treatment amid Lebanon’s economic collapse. Sali Hafiz said that she managed to release about $13,000 of the $20,000 that her family had deposited in the bank. Hafiz, who livestreamed the heist from a Blom Bank branch in Beirut, could be heard asking the bank employee to release a sum of money before jumping on the table with a gun and saying: “I did not come to kill. to anyone or start”. a fire. I came to claim my rights.

“I’m Sali Hafiz, I came today… to take deposits from my sister who is dying in hospital,” he said in the video as his alleged accomplices sealed the door of the bank. Hafiz, whose sister has cancer treatment costing $50,000, angered Hafiz because she claimed that she had visited the bank several times for her money, but she could only get $200 a month in Lebanese pounds.After the crisis of Lebanon’s economic collapse in 2019, the government froze bank deposits for three years causing many customers to take matters into their own hands and this would not be the last of such incidents.

Hafiz, who is also an interior designer, told local media that she used her nephew’s toy gun for the heist. The Daily Mail reported that gasoline was sprayed everywhere inside the bank. A bank customer named Nadine Nakhal said: “The intruders sprayed gasoline everywhere and took out a lighter and threatened to light it.” The customer also said that the woman with the gun threatened to shoot the manager if she did not hand over the money.

Hafiz said in the interview that she sold many of her personal belongings to finance the treatment of her 23-year-old sister who has cancer and that she is also considering selling her kidney. Hafiz, who instantly became a social media hero in Lebanon, said: “I had begged the branch manager for my money before, and I told him that my sister was dying, that I didn’t have much time left. to a point where I had nothing left to lose.

Lebanon’s economy has contracted by almost 60 percent since 2019, and the Lebanese lira has declined by 90 percent in value over the years. Lebanon’s national government debt reached $97.8 billion in June 2021. Thus, about three quarters of the population have been pushed into extreme poverty. Hafiz and her alleged accomplices managed to escape through a broken window at the back of the bank before security forces arrived and were not apprehended.