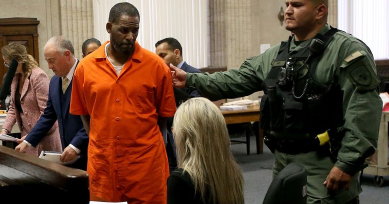 This comes after the R&B singer was sentenced to 30 years in prison in June after he was found guilty of sex trafficking and racketeering in a separate federal case in Brooklyn. And based on that ruling, Kelly won’t be eligible for release until he’s about 80 years old.

Kelly’s co-defendant and former business manager, Derrell McDavid, was also indicted and later charged with rigging Kelly’s 2008 trial on state child pornography charges by intimidating and bribing witnesses. Kelly’s other co-defendant, Milton Brown, a former associate of Kelly’s, also faces a single count of conspiracy to receive child pornography. Both were found not guilty on all counts.

Sexual abuse allegations against singer R Kelly began circulating in the 1990s but, despite the abuse allegations, he sold millions of his music records. The infamous singer still has two other trials pending, one in Minnesota and one in state court in Chicago.

Read Also: Who was Page Pate? Wiki, Biography, Age, Family, Cause of Death