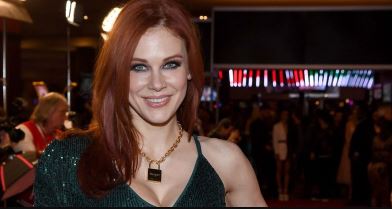 The actress revealed that she was upset with Hollywood for the producers of the Disney sitcom telling her to “play dumb” to make her “more likable.” Ward goes on to write that she finally felt ‘free’ as she performed hardcore sex scenes, which helped her earn a whopping six-figure sum a month and gain an adoring fan base. Throughout her memoir, ‘Rated X: How Porn Liberated Me from Hollywood,’ due out September 6, she talks about undergoing a ceremony to ‘unlock’ her vagina, screaming so loudly during her first X-rated movie that “security came.” to see how we are doing,” the Daily Mail reported.

“While scandal and weeping regret create headlines, and also a way out for celebrities from owning the fact they f***ed for fame, these tears they cry are crocodile tears,” Ward writes. Just like her close friend, fellow adult entertainer Angela White, Ward has has become a spokeswoman for the industry and has spoken about how she is now in control unlike her time in Hollywood. Ward was born Ashley Maitland Welkos, an only child who had a ‘sheltered’ upbringing in Long Beach, California, which is nicknamed ‘Iowa by the Sea’ because of its small town feeling. Her grandmother was a strong early influence and told her that “sex was a trap by the devil” and “all you’ll ever do is have babies.” The statue of Jesus in her childhood home would haunt Ward for most of her life, the shame of thinking he was disapproving of her casting a shadow that would last well into adulthood.

In her memoir, she also says that she had her first orgasm when she was 14, thanks to her then boyfriend, Daniel who read steamy letters in Penthouse magazine over the phone to her. Losing her virginity at 16 was a disaster, she writes, recalling how she began to giggle during the experience with Daniel and then his brother burst into the room. Meanwhile Ward began taking acting classes because, she writes, she “was never comfortable showing my emotions to anyone’ so doing it through a character was a relief.” She writes, “Even then I knew there was something I had to say to the world that wouldn’t be accepted by general society.”

She was cast in ‘The Bold and the Beautiful’, the second most popular soap in the country at the time after ‘Baywatch’, after a failed audition for the teen sitcom ‘Saved by the Bell’. She tasted success with her role on the show as Jessica Forrester. It also showed Ward the positive and negative aspects of the film industry. However, Ward found the plotlines hard to stomach given she was a minor at the time. That included one male co-star trying to rape her, which Ward was told would win her an Emmy and she should be “more excited about it.” Off screen, Ward was experimenting with her sexuality more and was starting to find what she calls her “inner porn star.”

Recalling Stella a woman she met at a makeup store, she said that she showed her the literal ins and outs of a dildo before introducing her to her boyfriend. A nervous Ward came back to Stella’s place armed with six condoms and the friend gave her and her boyfriend commands while she watched. On a trip to Paris, she met a model who had ‘primal’ sex with her, telling her “You act like such a nice girl but I knew you were such a wh**e who would open up those legs.” In her 20s, Ward got the part of Rachel on ‘Boy Meets World’ after the show’s producer Michael Jacobs preferred her to Selma Blair, who also auditioned for the role. However, while Ward loved the fame and attention that came with the part, she bristled at how “everything to do with my storyline was kind of sexual and no one tried to hide it.”

Ward writes of a disturbing encounter with ‘Fast & Furious’ producer Rob Cohen who was about to start filming ‘Triple X’ with Vin Diesel. Cohen called Ward “beautiful” and said she was “going to do so much,” and they talked about working together on the film. However, she writes, “I thought that the part was never going to happen unless I made physical payment to him. It was like he kept throwing out the bait to see if I would bite, telling me how my character was going to jump off the screen and make me a star. Something in the pit of my gut was warning me that I was playing with fire.” She called him a wolf in sheep’s clothing and as she anticipated the part went to somebody else. Cohen was also previously accused for sexual assaults by Asia Argento and his daughter Valkyrie Weather.

Ward’s Hollywood career did have one last hurrah, the 2004 comedy crime movie ‘White Chicks’, which brought her into contact with co-star Terry Crews. Crews would later reveal he was addicte