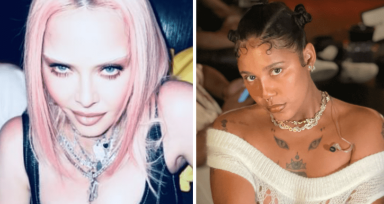 Madonna fully exposed herself in her new music video which featured her doing lots of steamy takes with Tokischa Altagracia Peralta. The 64-year-old also kissed the Dominican rapper on the lips before engaging in a series of lewd acts. The composer’s new work has been called ‘Hung up on Tokischa’, the advance of which she posted on her Instagram page on Tuesday, September 20.

In the social media clip, the ‘Queen of Pop’ was seen wearing many revealing outfits including a busty black corset and red pants. She also dressed in pink and neon outfits. Pictures of her showed her twerking and dancing sexy with the 26-year-old artist. It has been said that the filming of the new song took place in the Dominican neighborhood of Washington Heights.

Madonna has been in the business for several decades, but there had come a time in her life when her reps thought she had lost her career after she mistakenly showed herself in 1984 while performing at the first MTV Video Music Awards. . While appearing on ‘The Tonight Show’ in August this year, she revealed, “I did that show and I went down the very steep stairs of the wedding cake and I got to the bottom and started dancing in my white stilettos. Off.”

She went on to explain, “And I was trying to do this smooth move like, launch myself into the shoe and look like choreography. And my dress flipped over and my butt was showing. You can imagine? Those were the days when you shouldn’t have to show your butt to have a career. Now all is the opposite”.

Madonna later added that “it happened by accident and when she didn’t even know she was showing my butt. It wasn’t even like the whole butt, it was just like a buttock, like half of a buttock. Yes, when I went backstage, my manager told me that my career was over.”