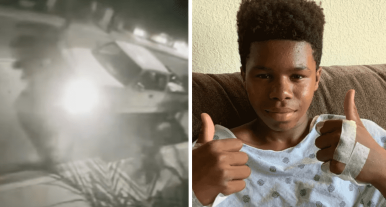 A 15-year-old teenager was hospitalized after a hit-and-run accident in which a truck collided with him while he was riding his electric bike in Redondo Beach on Saturday, September 17. LeBron Evans was traveling home on Saturday when the accident occurred, leaving him seriously injured. The teenager has now been released from hospital but is still recovering from the incident. Redondo Beach police have launched an investigation into the matter and are searching for the suspect.

Evans’ mother, Christina, revealed that her son was traveling with one of his close friends. The two of them were wearing their helmets and driving carefully as it was dark at the time. He slowed his bike at the corner of Rindge and Marshallfield lanes, toward the stop sign. However, as he was crossing the street, the truck ran the stop sign, struck him and trapped him and his bicycle under the front bumper.

“I felt my hands on the cement, burning as I dragged myself for at least half a block,” Evans said, adding that he was trying to keep his head up, as his helmet flew off his head, thinking that if his head hit the ground , “Would be dead”. Deputies were able to obtain video of the incident from a neighbor’s home security camera. In the video, LeBron can be seen freeing himself from the bike he bought this summer. Moments later, the truck driver backed up to dislodge the bike.

“It’s a miracle he’s alive,” his mother said. Neighbors and family friends have set up a GoFundMe page to help with LeBron’s treatment, as Christina is a single mother of two and can’t afford her treatment bills. More than anything, though, she wants the driver caught. “Why would he just walk away? Who does that?” she said. “In the scheme of things, he’s very lucky as it could have been worse. If this driver isn’t arrested and taken off the streets, the next kid may not be so lucky,” she added.

Agents described the suspect as a Hispanic male in his 30s to 40s with short hair and no facial hair. He was driving an older pickup truck, possibly an early 2000s model with yellow/orange lights and a working rack up front. Evans said the man didn’t say anything, but he seemed “out of it” as if he was drunk. Evans may not be able to ride a bike for a while and he will need to see a skin specialist to get better. Anyone with information is asked to call them at 310-379-2477.