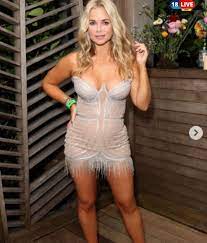 Kelly Hughes: Who is she? the model she proudly showed off her caesarean section scar in a photo shoot To commemorate the publication’s 58th year, Kelly Hughes, an American model, was recently featured in Sports Illustrated’s 2022 swimsuit issue. In order to raise awareness about embracing one’s own scars, Hughes showed off her caesarean section during the photo session.

This year, the outlet worked with the well-known company Frida Mamá to promote the daring Paga Con Cambio campaign, which advocates “positively transforming conventional social narratives linked to the female body, especially when she becomes a mother.”

Model Katrina Scott, who was caught on camera when she was six and a half months pregnant, also joined Kelly Hughes. The magazine took photos of another model, Hunter McGrady, during her six-month postpartum journey.

Here is everything that is known about Kelly Hughes and her professional life.

Kelly Hughes began her professional life as a model. Furthermore, the 42-year-old model has participated in several renowned fashion shows and has worked with renowned companies. Kelly also works as a professional jewelry designer under the name HUES.

Kelly mentioned feeling worried before the shoot in a recent interview with Fox News. The actress herself said:

“Before I even started filming, my mind was racing with a million ideas. I had never shown my scar before. And I’ve been pretty honest about how I struggled with insecurities about my scar. Since I’m a model, I originally didn’t want a C-section thinking that it would be much harder for me to recover.”

Kelly also spoke about the value of showing off her scars and how the whole experience had made her stronger. She observed:

“Honestly, I had no idea how much of an effect this would have on people. But my image spread like wildfire all over the world. I definitely wouldn’t have done this before, but then again, I didn’t see myself the same way I do now. And I think it’s wonderful that a publication like Sports Illustrated would show a woman who’s had a C-section and declare that she’s attractive.”

Kelly Hughes frequently blogs about her son Harlem, who was born in 2018. She had a C-section for him. Her son is now three years old.

Kelly recalled some of the difficulties she faced during her pregnancy. Ella Kelly had anticipated a natural birth, but she had no idea that she would ultimately need a C-section. She mentioned her encounter with Fox News as follows:

“I experienced morning sickness and other common pregnancy symptoms, but nothing serious. I had a healthy pregnancy and believed that I would give birth naturally. I was prepared because I had read everything there was to know about natural childbirth. I never suggested that a C-section might be necessary. I just wanted to get back to normal as soon as I could.”

Using the hashtag #scarlovechallenge on Instagram, the model has recently pushed other women to show off their scars. Hughes said that to further inspire women to embrace her scars, she will repost stories from women around the world.