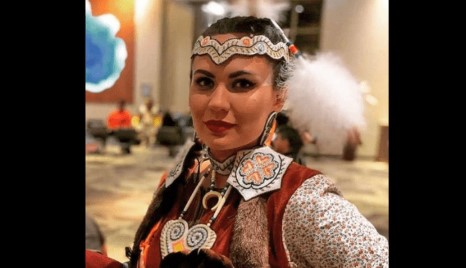 A report claims the co-owner of a Wisconsin-based queer indigenous artist collective is being accused of being white despite claiming to be of Native American descent. Kay LeClaire, also known as Nibiiwakamigkwe, describes herself as “two-spirited,” a word many indigenous people use to refer to non-binary gender identity.

As reported by Madison365, amateur genealogist AdvancedSmite claims LeClaire has been making money off the identities of indigenous people. Although she has claimed that she is of Métis, Oneida, Anishinaabe, Haudenosaunee, Cuban, and Jewish ancestry, AdvancedSmite claims to have used documents and web resources to discover LeClaire’s genuine ancestry, which is German, Swedish, and French-Canadian.

LeClaire, an indigenous arts leader and activist, has reportedly received numerous concerts and awards for her artwork in recent years. She also received a paid residency at the University of Wisconsin, a position on the Missing and Murdered Indigenous Women’s Task Force and various artist stipends, the Daily Mail reported.

The co-owner provided a statement to Madison365. “I’m sorry,” they said. “A lot of information has come to my attention since the end of December. I’m still processing everything and I still don’t know how to respond appropriately. What I can do now is offer a change.” ”

Moving forward, my efforts will focus on reducing damage by following instructions provided by native community members and community-specified representatives,” the statement continued. “Currently, this means that I am not using the Ojibwe name I was given and I am withdrawing from all community slots, positions, projects and grants and will not seek new ones.”

She added, “Any culturally related items I have are redistributed in the community, either to the original creators and to those they gave away when possible or elsewhere as determined by community members. Thank you.” It was through a Facebook announcement for an impending discussion on indigenous feminism that AdvancedSmite, who is also of indigenous descent, first learned of LeClaire.

The name Nibiiwakamigkwe was given to LeClaire in the talk, which AdvancedSmite claimed was unique because the given Ojibwe name is “typically something that would only be used in a ceremony or with other people who are Ojibwe or part of their community.” LeClaire’s last name is Ojibwe, which is “a common Native American surname,” according to research by AdvancedSmite.

However, they also saw social media posts from her that indicated that LeClaire seemed to frequently identify herself as Anishinaabe. “Our band names are very important, so I tend to get suspicious when someone just says Anishinaabe,” AdvancedSmite stated.

Then, according to Madison365, AdvancedSmite apparently used data and web resources to identify LeClaire’s actual ancestry as German, Swedish, and French-Canadian and published their results on the New Age Fraud Forum. LeClaire allegedly referred to herself as “a 20-something white female” on her now-deleted Facebook account, according to an investigation by AdvancedSmite.

On the site, it was also claimed that LeClaire, who went by Katie Le Claire, graduated from Hamilton High School in Sussex, Wisconsin, in 2012. They reportedly attended the University of Wisconsin and married a former student of Wisconsin. hamilton. Adam Pagenkopf, research expert, in the summer of 2018.

LeClaire and the collective parted ways on December 31, 2022, according to a collective Instagram post. “The giige collective would like to extend our gratitude and further sympathy to the indigenous community in and around Teejop in the wake of the recent revelation of the many wrongs done by former co-founder Kay Le Claire,” the post said. ”

Evidence has come to light indicating that Kay Le Claire has made false claims about her heritage, her art and her position in the community.” It took about a month for the New Age Fraud Forum post to reach the Madison community when customers began emailing the link to giige members. “I was so relieved that someone else had reported it and I didn’t have to. I had my suspicions, but I had nothing confirmed,” stated tattoo artist Nipinet Landsem, as reported by Madison 365.

“At first, I was relieved. And then I moved on to every human emotion known to man. I’m horrified, I’m upset. So much has been taken from us already. American society is built on things that have been stolen from Native Americans and Blacks. Stolen land, stolen resources, hand of stolen work, and white people think it’s okay to keep stealing from us.