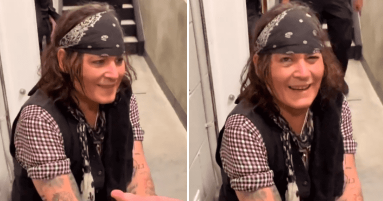 Johnny Depp had fans hyped after he got into the character of Captain Jack Sparrow while meeting them recently. The ‘Pirates of the Caribbean’ star reportedly met a fan and transformed into his iconic character with the greatest of ease. The actor, 59, was seen conversing with the fan using his normal voice at first, but he changed it at one point and delivered Sparrow’s trademark tones and slurred speech patterns.

Some weren’t sure if he was actually Depp, since he was clean shaven, but his voice was quite unmistakable. As Unilad reported, the lack of a beard put many off at first, but people soon realized he was the real deal once he started acting. Fan images were first shared on TikTok, where fans praised the actor for getting into character and making their day. One wrote that they loved “how he can get into character so quickly,” while another noted how he “slid right into the spirit of Captain Jack Sparrow.”

Someone else called Depp a “wonderful guy” and another said that he “seems happy” to interact with fans and bring them happiness. Depp may not return as the pirate on the big screen again, but he seems to have no problem getting back into Captain Jack’s boots. The acclaimed actor has often been seen putting on the character’s voice and mannerisms as he interacts with fans.

From time to time, he has even donned a costume and made guest appearances, one of which surprised guests at Disneyland when they boarded the Pirates of the Caribbean attraction. Those who had the opportunity to see it described it as a “surreal moment”. Depp later joked on the Graham Norton Show about how he got “every iPhone in the world” in response. The veteran actor has also donned his iconic costume to visit sick children in the hospital and bring them joy.

MEAWW previously reported how Depp sparked a flurry of rumors that he had undergone plastic surgery after revealing his new clean-shaven look. Some people believed that he had lost many of his earlier sharper features and somehow looked “fuller”. Others speculated that his past addictions to drugs and alcohol were to blame for his current appearance. Johnny admitted in December 2019: “He has been knowledgeable and open about my challenges with alcoholism and addiction throughout my life.”

TikToker and plastic surgeon Dr. Anthony Youn analyzed Johnny’s facial features in May. “There are rumors that he’s had hair transplants, but it’s not really obvious. And if he has, it’s pretty modest. His eyes don’t seem to have changed. He may have had some filler injections in his cheeks, but again pretty conservative.” “It looks like the nose could be a bit shorter, so rhinoplasty is a possibility, but I doubt it. So I would say Johnny Depp is quite real and not suspicious,” he stated.