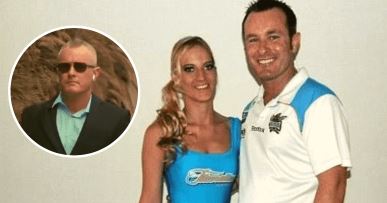 A man who allegedly killed a blind Gold Coast Titans cheerleader nearly a decade ago is back in custody on a new charge related to the indecent treatment of a 14-year-old girl. Dan Shearin, now known as Jayden Moorea, was apprehended last week and his residence in the Gold Coast suburb of Nerang was searched. Detectives reportedly seized a number of electronic devices from the home. Moorea, 48, appeared in court on Tuesday August 30 to seek his release on charges of indecent treatment of the teenager, but was denied bail. He was originally charged in an unrelated case in 2021 after he allegedly murdered his girlfriend Breeana Robinson in January 2013. However, that case has yet to come to trial.

Moorea’s lawyer reportedly attempted to have the court closed citing concerns about his client’s latest charge, but this was rebuffed. The court heard how the former cruise ship singer allegedly exchanged sexually explicit messages with the teenager over the Internet. As mentioned, this comes after Moorea was charged in Robinson’s death on January 29, 2013, when she fell 11 stories from her luxury apartment in Southport on the Gold Coast.

Police initially ruled the death a suicide, and a full investigation wasn’t launched until 2017. A court previously heard how police interviewed neighbors five years after the tragedy and witnesses gave inconsistent accounts of how Robinson landed. In January 2021, on the eighth anniversary of Robinson’s death, Magistrate Catherine Pirie ruled that the case would go to a jury.

Julie Carroll, a former neighbor of hers, told the court that she was watching a movie of hers in her 11th-floor apartment when she heard screaming and crying the night of the incident. “She could hear the man, he was screaming loud, screaming and a woman was crying,” she testified, saying the voices got louder over time. She said she didn’t see Robinson, but she heard a “high-pitched scream” that ended abruptly shortly after the argument died down. Another neighbor, Dr. Rebecca Adams, who lived a couple of floors above the couple, said she thought someone had been hit by a car when she heard a loud bang. To her horror, when she looked out the window, she saw Robinson lying on the ground with “blood pooling” around her head.

Lisa Dunscombe, the couple’s next-door neighbor, said she didn’t hear an argument, but she did hear a thud and what she described as an “air release” while she was sitting in her apartment. “Because it was a strange noise I went out to investigate… it was not a normal traffic noise,” she testified. Dunscombe initially thought the lifeless body was a mannequin and someone was playing a practical joke. She also told the court that Moorea seemed upset when she got into the elevator and behaved erratically.

Moorea was denied bail after being accused of indecent treatment of a 14-year-old girl. Meanwhile, Robinson’s aunt, Janine Mackney, said: “It’s been almost 10 years (and) we still don’t have a court date. The only happy news is that he is now in custody and will be there for some time.”

Moorea will stand trial in Robinson’s death, but reports suggest her attorney, Chris Hannay, was negotiating with authorities and the murder charge could be dropped. The suspect has always maintained his innocence about the incident and even published a book about the case titled ‘The Blame Game’ under his former name, Dan Shearin. In the book, she referred to Robinson as Bree and said her first impression of her when she saw her on Facebook was that she was a “beautiful blonde girl with the most cheeky smile and her beautiful personality jumped through the computer.” towards me.” He added that when he found out she was legally blind, “she just melted my heart like never before,” the Daily Mail reported.