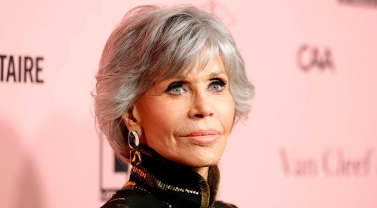 Actress Jane Fonda, who has made a name for herself in the industry with her activism and fitness, said she was aware of the time she had left and was “not afraid to go.” The 84-year-old two-time Academy Award-winning actress recently sat down for a candid interview with Entertainment Tonight, where she discussed her mortality and her mantra of living life.

She expressed her views on the issue and urged other high-profile celebrities to champion important causes because she believed she “wasn’t going to be around much longer.” The ‘Fun with Dick and Jane’ actress said she was ready, but that didn’t mean she was looking forward to going. “Not that she wants to go, but I am aware that it will be sooner rather than later,” she said. Until then, she plans to keep her health at its best. ”

When you’re almost 85, the mantra is ‘slow down,'” the veteran actress said as she discussed her workout routine. “Obviously I don’t use the same heaviness of weights that I used to. The important thing is to keep moving, stay flexible, keep getting stronger.”

She said that now she just wanted to celebrate every day of her life with her family and she wanted to celebrate her 85th birthday in December in a big way. “My family will be there,” Fonda said, adding, “My daughter and grandchildren will be coming from Vermont, and my son and his wife and son live in Los Angeles, and some friends will be coming. We’ll have a quiet time.”

Just a few months ago, the ageless beauty announced that she had been diagnosed with cancer and was undergoing chemotherapy. “So, my dear friends, I have something personal that I want to share. I was diagnosed with non-Hodgkin’s lymphoma and started chemotherapy treatments. This is a very treatable cancer. 80% of people survive so I feel very lucky,” the actress wrote on Instagram on September 3.

She also called herself “lucky” to “have health insurance and access to the best doctors and treatments,” and she acknowledged that she was “privileged” as a celebrity. She had previously been diagnosed with breast and skin cancer and she blamed the latter for her past love of sunbathing.