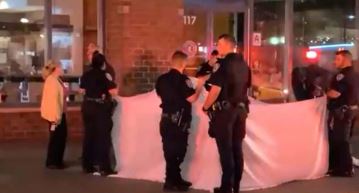 A troubled exotic dancer was shot to death execution-style on a Gramercy Park sidewalk early Thursday morning, September 1, police and witnesses confirmed. Imani Armstrong, who recently separated from her wife and lost her children to foster care, was coming home from a late shift at her IHOP job around 5 a.m. m. when the shooting happened. A masked gunman approached him and shot him in the back of the head at East 14th Street and Irving Place. “When I heard the shot, I was like, ‘Oh sh*t.’ It was like a loud bang. . . I heard a gunshot and then silence,” said Maximillian Stebelsky, 18, a neuroscience student who lives in a nearby New York University dorm, according to the New York Post. “I never predicted something like this would happen, especially across the street from where I live.”

Police said the shooting was not random, but a motive has not yet been determined. “The individual was attacked,” Department Chief Kenneth Corey said. “We have several suspects that we are investigating, but we don’t want to commit to anything at this time. But I feel very comfortable saying that it was not a random attack.” The shooter and a woman, both dressed in black, were seen fleeing north. However, sources claimed the woman may have been a bystander fleeing the gunfire.

According to reports, Armstrong had just received divorce papers from his wife. About a month ago, he moved out of the apartment they shared. Co-workers claimed that his children had been in foster care on Staten Island and that Armstrong had been attending anger management classes. However, before his murder, he didn’t seem to “have anything on his mind,” a co-worker said.

On the day of the murder, Armstrong, a native of Texas, stayed beyond her usual shift because the restaurant was busy. The co-worker said that Armstrong went to 14th Street to catch the train as usual. This was her daily routine when she left for the day. The IHOP employee said Armstrong had been trying to get better. “She was good. She worked well,” the co-worker said. “She got along with everyone. She knew a lot of people around here.”

He remembered there were other people around who called 911. “It’s a shame,” Manny said. “You have these people killing each other. They kill someone and the system lets them go. They are back on the streets and doing the same thing again. It’s crazy.” “The president, the politicians, they are not doing anything about it. All they think about is voting again,” he added. “You’ve got some sick and fucked up people here.”