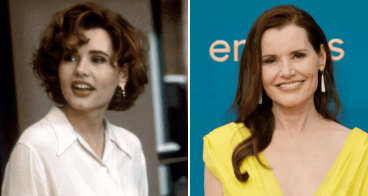 It’s hard to digest that it’s been more than three decades since Geena Davis played Thelma in the iconic film ‘Thelma & Louise’ in 1991, especially after she flaunted her ageless beauty in a recent appearance on ‘Good Morning Britain’. Geena, 66, delighted her fans with her youthful looks as she praised her former co-star Susan Sarandon for changing her life when she was “dying for courtesy”.

The actress spoke with hosts Susanna Reid and Richard Madeley on Monday, October 17, about how Susan showed her “what it’s like to live authentically and be in the moment.” Geena looked resplendent in an elegant black and red dress, showing off her smooth skin and bright lips, while her brown hair was styled in soft, wavy braids.

Fans on social media were flattered by her age-defying looks. “What a beautiful example Geena Davis is of embracing the natural aging process. She’s not a filler in sight. @GMB,” one tweeted. “Geena Davis is so hot,” wrote another. “I always thought Geena Davis was super hot too. I love her so much,” someone else said.

“Geena has been in some of my favorite movies, Beetlejuice is fantastic and a very different role for her in the brilliant Long Kiss Goodnight. Still looks great too,” added another. The actress has reportedly spoken out about the portrayal of older women in movies.

“My institute does all the research and current studies show that 20% of movie characters are 50 or older, but 5% are women, so that’s a very small portion of the roles we get,” he told viewers. As mentioned, Geena also revealed how her ‘Thelma & Louise’ co-star Susan Sarandon changed her life.

“She completely changed my life, because somehow in my sheltered life, I had never spent time with a woman who speaks her mind without qualification,” she said of meeting Susan. “I was used to living like someone who says ‘I don’t know if you’re okay with this or if this is a good idea.’

I was busy dying of courtesy. As soon as I met Susan, ‘OMG’ this was a whole different world. And it wasn’t like no one reacted differently to her. Everyone loved her and everything.” Geena added, “I was like, ‘Wow, you can actually be like that.’ She showed me what it’s like to live authentically and be in the moment.”

“None of us had any idea what the reaction would be, we were on a low budget,” the actress admitted of the 1991 feminist comedy drama. Elsewhere in the interview, the ‘Beetlejuice’ star also revealed how George Clooney expressed his regret at losing the role of young drifter JD to Brad Pitt. “She was sitting next to George Clooney on a flight and he was like, ‘I hate that Brad Pitt, he got the part in Thelma and Louise before I did,'” she recalled.