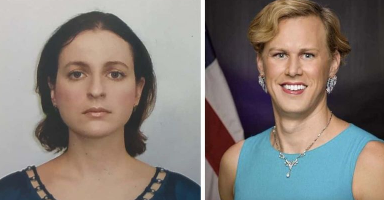 The wife of the first trans US Army officer allegedly told him to stop being a “coward” and overlook “ethical issues” when the couple tried to provide the Russian government with medical records of top military officers and their families. Johns Hopkins Major Jamie Lee Henry, 39, and Dr. Anna Gabrielian, 36, allegedly used their secret security clearance at North Carolina’s Fort Bragg to try to steal the base’s hospital records, he said. the Department of Justice.

Fort Bragg, which is home to some 52,000 active duty soldiers, is home to the US Army’s Delta Force and Special Operations Forces. The couple is originally from Rockville, Maryland. They had reportedly contacted an undercover FBI agent who they thought was from the Russian embassy. One indictment claimed that Gabrielian was apparently moved by her patriotism toward Russia. Henry, on the other hand, used authorization from him as a staff intern to gain access to the files, the Daily Mail reported.

“My point of view is that until the United States actually goes to war against Russia, I can help as much as I want,” Henry told the undercover agent when they met in August. “At that point, I’ll have some ethical issues that I’ll have to work out.” “You will work on those ethical issues,” Gabrielian responded. He also said that Henry was a “coward” for fear of breaking HIPPA. Gabrielian is an instructor of anesthesiology and critical care medicine at Hopkins. The indictment says she told the agent on Aug. 17 that she “was motivated by patriotism toward Russia to give whatever help she could to Russia, even if it meant being fired or going to jail.”

Gabrielian reportedly married Henry in 2015, which is the year he officially came out as transgender. Henry joined ROTC when he was 17 years old. She has been treating service members as a physician and internist for 17 years. Gabrielian told the agent that Henry had access to medical information at the military base, as well as insight into how she trained the US military to fight for Russia against Ukraine.

“Henry explained to the [undercover agent that they were] committed to helping Russia, and that he had sought to volunteer to join the Russian military after the conflict in Ukraine began, but Russia wanted people with ‘combat experience’ and he he had none,” the indictment says. “Henry further stated: ‘The way I see what is happening in Ukraine now is that the United States is using the Ukrainians as a proxy for its own hatred of Russia,'” the charging document added.

Gabrielian then met with the agent at a hotel in Gaithersburg, Maryland, on August 31, and offered medical records for a spouse of a service member at the Office of Naval Intelligence, as well as that of a family member of a veteran of Air Force. “Gabrielian highlighted to the [undercover agent] a medical problem reflected in the [military wife’s] records that Russia could exploit,” the indictment says.

During the same meeting, Henry also gave the agent medical information about five patients at Fort Bragg, including a retired Army officer, a Department of Defense employee, and spouses of active and deceased veterans. In addition, both spoke with the agent about the contingency plans for his family, in case the operation came to light.

“Gabrilelian suggested a cover story for their interactions and a plan for Gabrielian and Henry’s children to flee the United States quickly if Gabrielian and Henry are told to act in a way that could expose their communications and actions to the United States government.” United,” the indictment says. Gabrielian also asked the agent to help the children get “a good flight to Turkey to go on vacation because I don’t want to end up in jail here with my children as hostages over my head.” The duo have now been charged with conspiracy and wrongful disclosure of individually identifiable health information. If convicted of both counts, they face up to 15 years in federal prison. In a statement, a Johns Hopkins spokesperson said: “We were surprised to learn of this news this morning and intend to cooperate fully with investigators.”