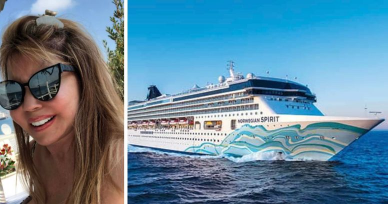 During his dream vacation in the South Sea Islands, a wealthy tycoon, who controls Tiffany’s jewelry empire in Turkey, died after falling from a cruise ship. Dilek Ertek, 71, a Tiffany dealer in Turkey for more than 20 years, fell into the South Pacific Ocean from the Norwegian Spirit ship on October 26, off the coast of Tahiti. According to the Daily Mail, his family has asked the authorities to investigate her lover, who is of Swiss nationality, as he had accompanied her on vacation.

Gokce Atuk, Ertek’s son, claims that the jewels disappeared from his mother’s safe. She may have fallen into the icy waters around 3am, according to CCTV footage from the ship, but her anonymous lover did not report her missing until 20 hours later, according to local media. Ertek, who was just 5 feet 2 inches tall, managed to fall over the meter-high security barrier into his cabin, stumping experts investigating the case. Before they anchored in Tahiti three days later, the 74-year-old Swiss partner was held hostage in a different cabin and watched by the ship’s staff.

Dilek Ertek Cause of Death

Tahiti police reportedly questioned him before releasing him for lack of evidence. Since then, he has returned to Switzerland. When the initial search for his body proved futile, the ship informed the authorities and headed back to the nearest port, on the island of Papeete. Security footage of the ship is currently being examined and suggests an unidentified figure fell into the water. Tahiti authorities are said to have “improperly searched” Ertek’s room.

Some people argue that because the death occurred outside their jurisdiction, they have simply done the bare minimum. However, Ertek’s lawyers have reportedly argued that Tahiti should be in charge of the investigation because it was the closest nation at the time the maritime incident occurred. The search for Ertek’s body at sea has been called off.

Ertek had boarded the ship on the island of Papeete, French Polynesia, on October 24 to travel to the small South Pacific island of Bora Bora for his birthday on November 5. The cruise was supposed to end in Honolulu, Hawaii. Dilek Ertek was born in Istanbul and obtained a degree in architecture from Mimar Sinan University. She went on to study diamonds at the Gemological Institute of America in New York and eventually opened the first Tiffany store in Istanbul in late 1995. For more than 20 years, she served as a distributor for Tiffany & Co. in Turkey.